Last-of-line Impreza super saloon goes out with a bang 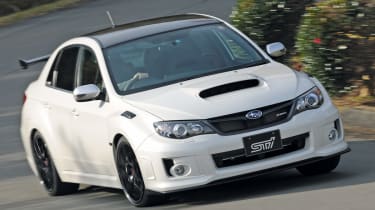 The S206 is Subaru’s final farewell to the current Impreza, and the company has saved the best until last. More power and uprated suspension mean you can carry crazy speed into corners and accelerate harder on the other side. The NBR pack includes a rear wing and carbon roof, too. The car won’t officially go on sale here, so if you’re interested, a grey import is your only option – and that won’t be cheap.

The ultimate limited-edition Impreza has been unleashed. Only 300 of these more powerful rally-bred STi S206 models will be built – and just 100 of those will feature the NBR Challenge Package tested here, designed to celebrate Subaru’s class win in the 2011 Nürburgring 24 Hour race.
With its unique 19-inch BBS rims, carbon fibre rear wing and carbon roof, the STi S206 really looks the part. Inside are Recaro sport seats, wrapped in leather and Alcantara, and S206 badging.
Power from the 2.0-litre boxer turbo is up from 301bhp to 316bhp, while torque increases from 393Nm to 431Nm. The engine is hand-built, and the secret to the improved performance is a low-friction turbo, remapped ECU and free-flowing exhaust that boosts low and mid-range torque. The suspension has special inverted Bilstein dampers and stiffer springs, and those 19-inch rims are wrapped in Michelin Pilot Super Sports rubber.
Right from the off we switch the vehicle dynamics control (VDC) to its sportiest setting and floor the throttle. Immediately you can feel the extra torque between 3,000rpm and 4,000rpm, giving extra pace on the exit of corners and making it easier to drive at low speeds.
It’s in the bends where the S206 really sets itself apart, though – cornering fast, flat and with huge grip, it refuses to understeer no matter how violently you turn in. The suspension even manages to feel supple in a straight line.
There’s bad news, however: a combination of the strong Yen and emissions regulations mean that the ultimate Impreza won’t officially be sold in Britain. If you’re interested, don’t despair – a handful of grey imports are sure to make it to the UK.
Share this on TwitterShare this on FacebookEmail