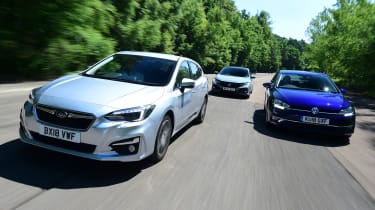 Once upon a time, the Subaru Impreza was a rally-bred family saloon. Those days are long gone and, alongside its pursuit of SUV sales, the Japanese brand has reinvented its Impreza yet again – this time as a practical family hatch.

However, it has kept its identity as a Subaru, with some decidedly different design and engineering features, as we’ll see.

Competition in this sector is tough. The Impreza only comes with a CVT auto box, so we’ve lined up our current family hatch champion, the Volkswagen Golf in DSG auto form, as well as the Honda Civic CVT.

Both rivals have been refined over the years to deliver what buyers in this class expect; the Golf is a facelifted version of the seventh-generation model, while the Civic has 10 iterations under its belt.

Can the new Impreza join or even beat them, or is it still lost in the wilderness? We put this trio through an Auto Express road test to find out. 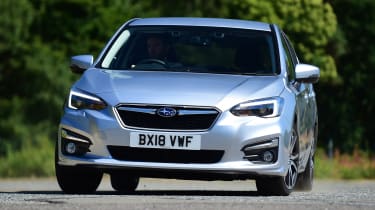 Priced from £25,010, the Subaru Impreza lands at the heart of the family hatch class. It’s a unique proposition for buyers; the question is if that’s enough to take this 2.0i SE Lineartronic to the top.

If the engineering underneath the Impreza looks like an individual choice on paper, then it’s confirmed once you’re under way – but it’s not without merit.

That suspension layout gives a nice ride – it’s almost as comfortable as the Golf when fitted with its adaptive dampers. There’s a controlled and relatively silky feeling to the way the back axle deals with bumps around town and other imperfections at higher speeds. It’s nicely balanced with the front, so the Impreza delivers a level of ride comfort that puts it towards the top of the class in this area.

The rear suspension layout allows for four-wheel drive, but that’s an odd choice as the car doesn’t need it. The naturally aspirated engine feels breathless on the move and, linked to a CVT, there’s not enough of a direct connection between throttle inputs and the performance to trouble the car’s traction. 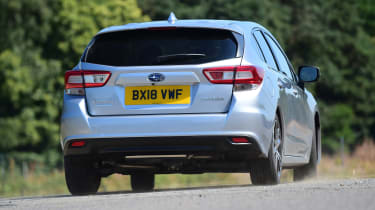 At least the CVT optimises performance on full throttle. With no gears (there are steps to simulate ratios if you take manual control), we couldn’t record in-gear figures, but even so, the Impreza was the slowest car on test – 0-60mph took 8.5 seconds.

Sometimes with CVTs you get a rubbery feel from the drivetrain, but this is one of the better set-ups we’ve tried. Touching the throttle doesn’t instantly send the revs soaring, although if you want even a half-decent slug of acceleration, the non-turbo engine needs working hard, impacting refinement.

The handling is okay, but nothing more. The steering offers a good weight and there’s acceptable grip, but what enjoyment the car serves up is sapped by the powertrain once you start to increase the pace.

Testers’ notes: “Subaru is known for its off-road ability, so although this four-wheel-drive hatchback isn’t likely to venture too far from the tarmac, the engineering underneath should be robust.” 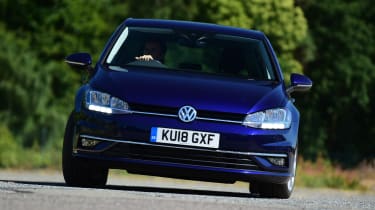 The Volkswagen Golf is our current favourite family hatchback and blends premium appeal with practicality and technology. At £26,090, this 1.5 TSI Evo DSG model in GT trim is the most expensive choice here. But is it also the best?

The drivetrain is also a strong point. Although it’s down on power next to both of these rivals, it offers the most torque, with 250Nm from 1,500rpm. This gives flexibility, which, when combined with the transmission, makes it the nicest car to drive.

It’s more difficult to compare the Golf with its rivals due to their different transmissions, but the VW trailed the Honda by only four tenths from 0-60mph, taking 7.8 seconds. 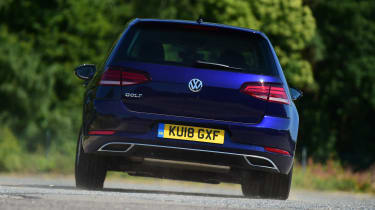 The gearbox is smooth when left to its own devices – apart from when manoeuvring, when the clutch comes in abruptly so parking can be a little jerky. It shifts well in manual mode. Changes are rapid but smooth and, given the DSG’s merits, it’s difficult to recommend either of the rival CVT options over the Volkswagen.

Crucially, it also means you feel more in tune with the car. This 1.5 TSI Evo engine pulls well and is refined, so while it might lack the last few tenths in straight-line acceleration, this isn’t so critical out on the road, where other factors count for more.

The Dynamic Chassis Control adaptive suspension option gives a lovely, plush feel to the Golf’s damping. These are three of the best-riding family hatchbacks on sale, thanks to their sophisticated suspension set-ups, but with the DCC option fitted, the VW feels the most capable car in most situations – but there isn’t much in it. The ride comfort doesn’t sacrifice agility, either. 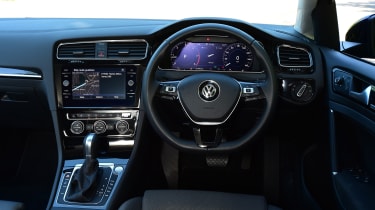 The steering is a good weight and this doesn’t detract from the driving experience. The Golf is relatively fun to push faster as the chassis underneath has a wide range of talents. This includes refinement and the Golf is smooth in town (ignoring the gearbox from stationary), and on the motorway it feels calm at speed. 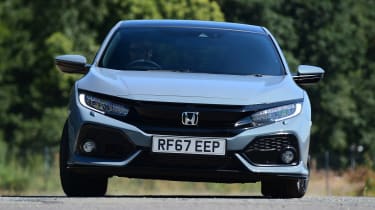 Honda’s 10th-generation Civic is the best yet. We know from previous tests that it delivers much of what buyers in the family hatch class are looking for – but how does it fare in £24,980 1.5 VTEC CVT Sport guise against its new Japanese rival?

Sweeter than the Subaru is the answer. While the CVT box in the Impreza doesn’t get in the way of the driving experience, it’s also not quite as good as the Honda’s. That’s partly down to the Civic’s extra torque lower down in the rev range from 1,700rpm, which means the transmission doesn’t have to work the engine as hard, sending the revs higher.

This also means there’s good performance, and the Honda outsprinted the Subaru by at least one second in our kickdown tests between 30 and 50mph, as well as between 50 and 70mph. With the most power, it was the fastest car from 0-60mph, too, taking 7.4 seconds – quick for a warm hatch. 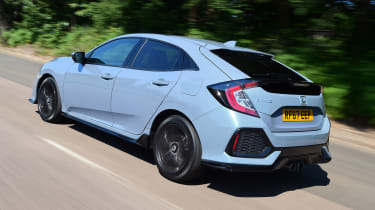 As with the Impreza, there are engineered steps in the gearbox to simulate gear ratios, and just as in the Subaru, they work okay. However, leave the CVT to its own devices and at moderate speeds it works well. Up the pace and a similar problem to the Subaru presents itself – it just doesn’t give a very strong or nice connection to the car, which is a shame for two reasons: the manual alternative is sublime, and the Honda’s chassis is really enjoyable.

The steering is direct, roll is well controlled and the damping delivers enough comfort. It’s sweet to drive as well, and the Civic provides enough grip to rival the Golf – only that transmission lets it down (it’s good in isolation) compared with the slicker DSG unit in the Volkswagen.

Testers’ notes: “The Civic’s styling won’t be to all tastes, especially compared with the more conservative Golf. However, design doesn’t impact practicality here. The well-built Honda is a usable family hatch.” 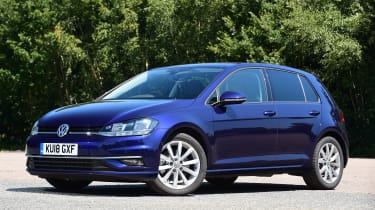 The Golf has become the benchmark in this class for a reason. Impressive equipment, practicality, comfort and performance all make it the most attractive car here. It’s cheap to run, has a nicer auto box than the Honda, plus great ride quality and dynamics. It also offers the highest-quality feel and the most advanced tech – this is the consummate all-rounder, even if it’s better with the 1.0 TSI engine. 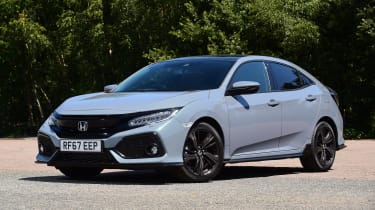 Honda’s family hatch is mostly a match for the Golf for comfort and dynamics, while its big boot means it’s slightly more practical. However, this isn’t enough to take the win. The divisive styling, sub-standard infotainment and CVT gearbox just count against the car, even if it delivers strong performance and real-world economy. Quality still isn’t a match for the Golf’s, either.

The ride quality is the Impreza’s strongest trait, while it matches the Golf for practicality. But it can’t compete on quality and trails on kit, while the odd choice of a naturally aspirated engine, CVT box and four-wheel drive means it’s not as good to drive and isn’t very efficient. This feels like a missed opportunity for Subaru; there are a few key features it has got right here. 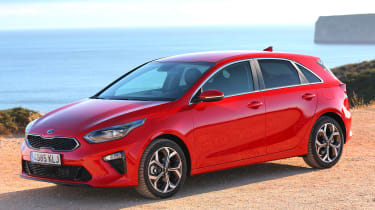 The Ceed is back in third-generation form, dropping the apostrophe from its name. A bigger 395-litre boot, smart design, more autonomous tech and a new platform all bode well for the Kia in a tough market.