Final report: we’ve reined in the Honda Civic’s sensitive AEB just as our time with hatch has come to an end

With our minor frustrations regarding the safety systems resolved, the Civic has proven a capable and likeable family hatch. We’re sad to see it go, but its souped-up Type R brother has joined our fleet as a replacement. Look out for a first report soon.

We’ve come to the end of our time with our Honda Civic, and I’ll be sad to see it go. But one thing I won’t miss is its over-sensitive AEB system.

Our car spent much of its time commuting in and out of central London, and even at walking speeds the Civic’s bright orange accident warning trigger flashed at every opportunity. It was infuriatingly premature, in fact, beeping furiously even when I was fully aware of the car in front.

But I understand these systems are there to maximise safety – and if the worst did occur, I’d be grateful for the Honda’s clever forward-collision tech. So I was reluctant to switch the system off, as that would be asking for trouble. 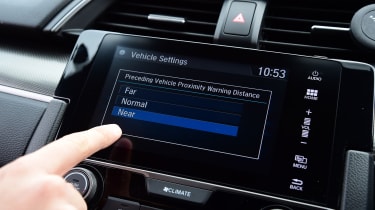 It’s something I lived with for months, but recently I delved into the 700-page user manual to try to turn down the system’s sensitivity. The infotainment set-up isn’t the easiest to navigate, although it’s packed with functionality, and among the lighting options and auto-fold side mirror settings sat a menu dedicated to the Civic’s safety systems.

I uncovered a specific setting for the pre-collision warning – and found it was primed to activate in its most sensitive mode. Amazingly, a simple 30-second solution all but entirely eliminated the flashing lights and warning beeps; so I could drive to and from the office safe in the knowledge that the systems are still working without the firework display.

As a result, the car became much more pleasant to drive. Sitting in such relative peace and quiet allowed us to better appreciate the Honda’s fine manners. Its light but accurate steering is great around town, while its refined powertrain meant commutes were as smooth as can be expected in London. 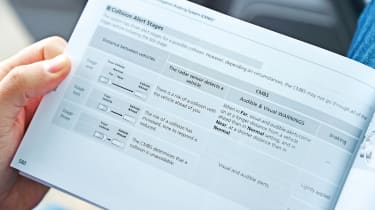 Its punchy engine proved hugely satisfying, offering enough power to keep up with faster-moving traffic, plus decent economy on motorway journeys. The seats were always comfortable, too, and while the interior isn’t the most inspiring in this class, you can’t argue with our SR model’s standard kit list.

Its practicality was tested to the max as well, acting as a makeshift van during the weeks running up to my wedding last year. Some small features also made an impression, such as the handy cable clip behind the front cubbyhole and the minimalist side-sliding parcel shelf.

But even in this day and age, it’s rare to find a car without its foibles. The best models and most experienced makers get things wrong from time to time. In this case it was the fiddly infotainment system, making our AEB frustrations worse than they really needed to be. 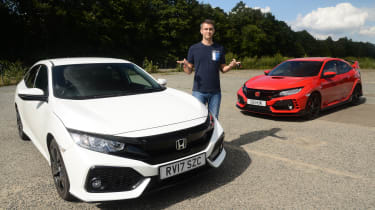 The Honda Civic is good fun to drive, great to live with, and has a lot in common with the Type R

The hot hatch is a staple of the family five-door class, because these cars have been offered with souped-up variants for decades here in Britain.

Honda is no exception with its new Civic. But instead of waiting the usual 12 or 18 months after the launch of the common-or-garden model to introduce its hot hatchback, the Japanese car maker released its fire-breathing Type R almost immediately.

Producing 316bhp from its 2.0-litre turbocharged engine, it has more than double the power of the humble 1.0-litre model on our fleet. The Type R’s aggressive bodywork, big wing and 20-inch alloy wheels hint at its ability, while its triple tailpipes leave you in no doubt of the firepower beneath its sculpted bonnet. 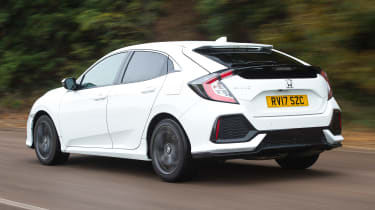 But driving the two cars back-to-back throws up a few surprises, not least how similar they feel through a series of tight bends. Our standard Civic displays exemplary body control, and its chassis is well balanced. Plus, the steering is sweet, and the well judged suspension isn’t uncomfortable on rougher roads. All without the Type R’s trick adaptive dampers.

I’m pleased we opted for the six-speed manual gearbox, rather than the city-friendly CVT auto, because I’m impressed by the short-throw gearshift. The snappy action is more akin to that of a two-door sports car than a five-seat family hatchback, and while you don’t get the pleasure of the Type R’s aluminium shift knob, the leather-covered lever is pleasant enough.

Yet when you want to sit back and relax, the Civic will morph from engaging five-door into comfortable cruiser. The small but strong three-cylinder engine is quiet and relatively refined, and without the hot hatchback’s standard-fit sports exhaust and huge rims, you’re saved from unwanted engine and road noise on longer motorway journeys. On a recent trip back home to Newcastle, news editor Jonathan Burn managed a strong 47mpg as well. 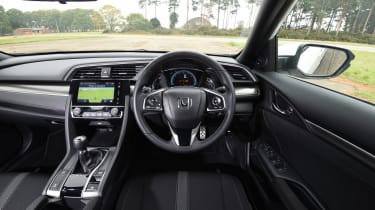 Its breadth of talents is remarkable. There are things that are starting to frustrate, however. The overactive collision warning system is one, the fiddly infotainment system another. A small 46-litre fuel tank means all-too-frequent trips to the petrol station, too.

Practicality is a strong suit, though, and no matter which version you choose – SR or Type R – you’ll benefit from a huge 478-litre boot and big rear bench seat.

So, despite our Civic missing out on the Type R’s out-and-out performance, it does display many of the same attributes – and that’s great news if you can’t stretch to the full-on hot hatch version. 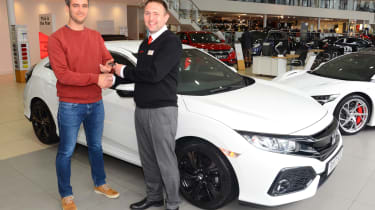 If you were asked to name Britain’s most recognisable family car, chances are you’d think of a Volkswagen Golf or Ford Focus. But while both have sold in their millions since launch, the Honda Civic’s roots can be traced all the way back to 1972.

Now in its 10th generation, the Civic is barely recognisable from the cute and compact original, and there’s no denying the new model looks distinctive alongside its more mundane predecessor. Honda’s designers have thrown away the rulebook for the latest car, and its sharp lines, bold creases and sloping roofline are already creating debate in the Auto Express office.

To see if the car’s interest runs more than skin deep, we’ve added a new Civic SR to our fleet. We’ll be assessing it over the next six months to see what it’s like to live with. We’ve chosen the entry-level 127bhp 1.0-litre three-cylinder turbo engine, linked to Honda’s lovely six-speed manual gearbox. 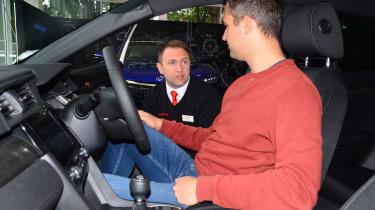 Our mid-spec SR car comes loaded with equipment. To talk us through the standard kit list, we joined general sales manager Matthew Scott at Chiswick Honda, in south-west London, for a full rundown. His enthusiasm for the new Civic was clear from the outset: “It’s a huge improvement over the old car,” he told us.

The only option on our Civic is the White Orchid Pearl paint. It costs £525 and looks great when it’s sparkling clean. Elsewhere, Scott pointed out the SR’s standard 17-inch alloy wheels, all-round parking sensors and seven-inch touchscreen sat-nav.

Android Auto and Apple CarPlay are fitted as standard, and vastly improve connectivity options. Using sat-nav through my phone is great, because the Civic’s infotainment system gives away ground to the best cars on the market, such as the Golf.

A flick through the sales brochure shows  that all Civics get a host of safety options, including lane departure alert, adaptive cruise control and automatic emergency braking, but the over-sensitive collision warning system is already getting on our nerves. More on that in a future report.

Other notable kit on our SR car includes dark rear privacy glass and body-coloured, electrically folding door mirrors, as well as a handy reversing camera and LED daytime running lights. If you want full LED headlamps, however, you’ll have to step up to the more expensive EX version.

For £20,340, the Civic SR represents decent value for money, though. Honda reckons you can finance one for just £209 per month over three years with a deposit of just over £5,000. That’s £4 more than a lower-powered Golf 1.0 TSI 110 in SE Navigation trim, although two-zone climate control, a rear-view camera and tinted glass are all extra on the VW. If you’ve got less to spend, Honda also offers S and SE specifications on the 1.0-litre car. 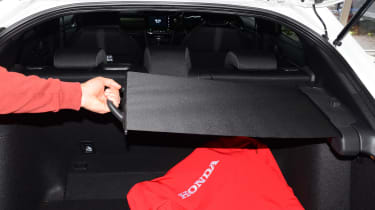 But not only is it loaded with kit, it’s also genuinely good to drive. The short and snappy six-speed shift is a pleasure to use, while the firmer set-up and tight body control make it a genuinely enjoyable car to point through a series of corners.

The 127bhp engine is our pick, offering surprisingly peppy performance without huge running costs. We’re managing 47.7mpg so far, but on a longer steady-speed journey to Cornwall, this nudged 58.5mpg. Our art director Darren Wilson praised the car’s practicality and comfort, transporting his family over the 600-mile round trip with space to spare.