Special-edition WRX STi turns up the heat, but the rally-bred saloon is still showing its age 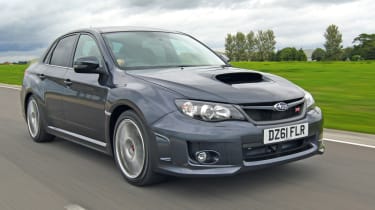 The standard WRX STi is already a lightning fast way of getting from A to B, but the 320R adds greater pace, more flexibility and free sat-nav into the mix. Even so, it feels like a car that’s growing long in the tooth. High fuel consumption and a low-rent interior are becoming increasingly difficult to justify for Subaru, especially with hot hatches now offering similar real-world pace, enjoyment and practicality for significantly less money. The new Impreza, due next year, can’t arrive soon enough.

It wasn’t so long ago that we’d see a stonking new Impreza every week. But these days, that’s not the case – not only has Subaru dropped the Impreza name from its rally-derived, four-wheel-drive car, but fewer people want them.
This leaves the current WRX STi with something of a problem. In an attempt to boost sales, Subaru has decided to offer extra power and a free sat-nav system in a new model, badged the 320R.
The name refers to the power output of the 2.5-litre turbo boxer engine (it’s actually 316bhp, which is 20bhp more than the standard car). Torque is increased too, with 450Nm now available. That makes for a faster WRX STi, as indicated by the 4.9-second 0-62mph time, which is three-tenths up on the standard car.

The difference on the road is marginal, although the increases do provide a bit more flexibility. Plus, there’s greater punch in the mid-range because peak torque output is delivered 600rpm lower, at 3,400rpm.
The four-wheel-drive system allows drivers to exploit the extra performance effectively, so the WRX STi retains the old Impreza’s eye-opening cross-country ability. Grip is good and the suspension is supple enough to shrug off rough roads, while also maintaining decent control.
However, the steering is a touch vague, which leaves you guessing what the front wheels are doing. Likewise, the gearshift could be quicker across its gate, especially with the engine demanding frequent changes.
Overall, the driving experience remains old-school Subaru, even if the company has resisted the temptation to add its famed noisy exhausts and gold alloy wheels. Don’t expect the usual numbered plaques inside, either. In fact, from the driver’s seat, the 320R doesn’t give any hints about the extra performance on offer. The sat-nav is the only difference over the regular car.
The key issues with the WRX STi are related to cost. Fuel consumption will hover around the 20mpg mark, even under moderate driving, while the price looks steep. Even with the extra power and sat-nav, the low-rent interior is inexcusable in a car costing over £30,000, and this only weakens the 320R’s case.
All that will change when Subaru replaces the Impreza in 2012. Until then, though, the 320R fills a gap for the dwindling number of buyers in the market for such a performance car.
Share this on TwitterShare this on FacebookEmail