The new Impreza doesn’t succeed, and risks losing its traditional customer base 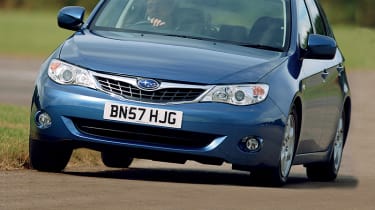 Driving Subarus are renowned for their keen handling. Although the latest Impreza is no performance machine, it’s dynamically strong. Body roll is kept well in check, while the all-wheel-drive grips impressively. Ride quality is good thanks to the multi-link rear suspension, and the Impreza feels supple on rough surfaces. Sadly, the package is let down by the steering. It’s both overly light and short on feel. It’s a reasonably fast rack, which makes it manoeuvrable around town, but there’s precious little feel. The engines are also disappointing: for now, it’s just 1.5-litre and 2.0-litre ‘boxer’ units. The 1.5 in particular feels lacklustre and needs to be worked hard. Luckily, the five-speed manual gearbox is positive. There is also an odd ‘dual range’ function, which effectively offers 10 speeds: handy for the Forester, but pointless for a family hatch.

Marketplace It’s an Impreza, but not as we know it! This is part of Subaru’s plan to move itself upmarket, while giving the Impreza more mass-market appeal. However, the five-door hatch, while radically different from the old boxy saloons, is by no means handsome. It has none of the old model’s aggression and character; the latest model looks overweight and anonymous. For now, there are just three versions, with two engines: the R is the entry-level version, offered with the 1.5-litre or 2.0-litre, while there’s also a higher-line 2.0-litre RX. Subaru is bringing in limited supplies of the performance STi turbo, but has no plans to sell the formerly-popular WRX in large numbers. All Imprezas come with full-time four-wheel-drive, making it distinct from competitors such as the Ford Focus and Kia Cee’d: however, Volkswagen, Nissan and SEAT, amongst others, all offer 4WD rivals.

Owning The attempt to move things upmarket has failed inside. The materials feel cheap and the vast expanse of grey plastics is unappealing. Everything seems rather dated, and this isn’t helped by the old-fashioned column stalks and standard instrument dials. Built quality is solid and the driving position decent, however. But compared to competitors, passenger space in the rear is average and legroom is tight. The boot is also a bit small (though the load space is wide, and the low lip makes access easy). As for economy, the Japanese firm’s engines have never been noted for returning good figures; our test 1.5 achieved just 28.7mpg. CO2 figures are correspondingly high. Servicing costs are hefty too, while we think it’s unlikely the Impreza’s retained values will top 40 per cent.