The Suzuki Celerio is a newcomer to the city car class, offering plenty of space and decent economy 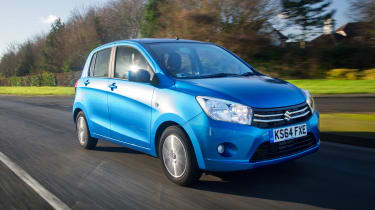 While the Suzuki Celerio can’t match the Volkswagen up! or Hyundai i10 for driver enjoyment or interior quality, it comes loaded with kit and feels much bigger inside. The only engine from launch is a 1.0-litre three-cylinder petrol, but it’s free to tax and will return 65mpg. For value for money above all else, the baby Suzuki shines. No other car can offer so much equipment at such a low price.

With 84,000 units sold in the UK last year, the city car segment is now at its highest ever level – and growing like never before. In the last three years we’ve seen all-new models from no less than eight manufacturers, with countless others destined for release in the not-too-distant-future.

Suzuki has the latest arrival to the A-segment party, and is hoping to capitalise on the market’s growth with the addition of its all-new Suzuki Celerio. With it sees the demise of two Suzuki city cars – both the Alto and the Splash.

On paper, things look good for the new Suzuki. Prices for the base-spec SZ3 start from just £7,999, and while that’s a full £2,000 more than the outgoing Alto, it packs bags more equipment and is actually a better value car. All models boast alloy wheels, DAB radio and Bluetooth, while the range-topping SZ4 we tested even features kit such as electric rear windows, a better stereo and body coloured trim. 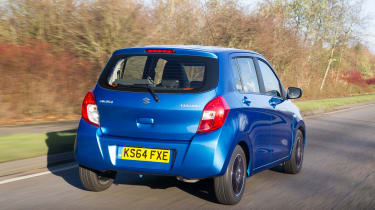 The entry-level model will suit most tastes. There are no higher-quality plastics on the top-spec SZ4, for instance, and all the driver-centric touchpoints feel solidly built. Unlike many of its rivals, air-con comes as standard on all versions, as does a USB connection for charging your phone.

Practicality is good, too. The Celerio has been cleverly packaged to offer best-in-class boot space and impressive rear cabin room. The 254-litre boot is three litres larger than the VW up! and two litres bigger than you’ll find in Hyundai’s i10. There’s enough room in the back for a six-foot passenger to sit behind a similarly-sized driver, and if you’re prepared to squeeze there’s even a three-point belt for middle seat occupants.

Up front it’s easy to get comfortable. Every model gets a height-adjustable driver’s seat, which goes some way to compensate for the lack of reach adjustment in the steering wheel. There are various cubbies dotted around the cabin, including two cupholders and a decent-sized glovebox. It’s just a shame the door bins aren’t bigger: you’ll struggle to fit more than a few loose parking tickets and a road map in the thin pockets. 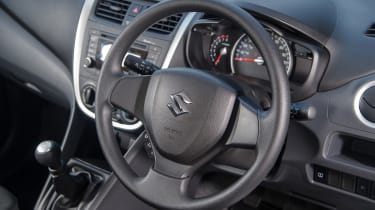 As you’d expect, the small Suzuki feels perfectly at home around town. The well-weighted steering gives confidence when negotiating tight streets, but doesn’t feel too heavy for parking. The turning circle is impressive too, while the slab-sided shape offers great visibility thanks to its large glass area.

However, it’s a different story on the open road. Of course, winding country lanes aren’t the Celerio’s natural habitat, but the VW up! and Hyundai i10 both feel more grown up out of town, offering precise steering input at virtually any speed. That said, the baby Suzuki feels remarkably stable on the motorway, and if it weren’t for the loud tyre roar, it would be a relatively accomplished cruiser.

Company bosses have modest plans for the Celerio city car and the Suzuki brand over the next 12 months. By removing Alto, Splash, SX4 and Grand Vitara from the line-up, the Japanese car maker simply wants to match last year’s sales figures in 2015. It hopes to sell just 6,000 Celerios in the first year, with only 10 per cent of buyers predicted to opt for the more economical Dualjet model due in April. 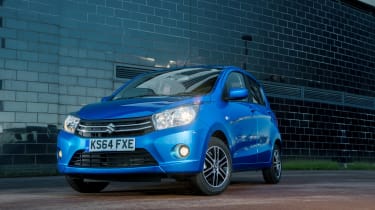 We had also brief spin in a prototype version of the AGS automatic – set to be a bigger seller in the Motability market. It’s jerky nature and unpredictable changes mean unless you absolutely have to have an auto, the manual is a much better bet.

If standard equipment is key, no other car on sale offers so much kit for such little outlay. While it may cost £2,000 more than a base-spec Dacia Sandero, true rivals like the Skoda Citigo and PSA trio (the Citroen C1, Peugeot 108 and Toyota Aygo) will set you back far more for a similarly-specced alternative. The Celerio might not be the best car in its class to drive, but it’s up there with the best for outright value for money.