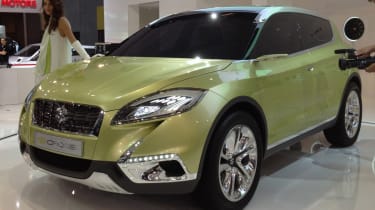 The Suzuki S-Cross has been unveiled at the Paris Motor Show. And senior Suzuki executives have told Auto Express that, contrary to pre-show speculation, the concept will not wear the Suzuki SX4 badge. The production model, which should hit showrooms towards the end of next year, will sit above the SX4 in the Suzuki model range as a Nissan Qashqai rival. As you can see from our show shots, it’s a whole lot sportier than the SX4. In profile, the S-Cross almost echoes the Range Rover Evoque, with a gently sloping roofline meeting a rising waistline. The sleek LED tail and fog lights that were revealed in pre-show teaser images are accompanied by LED strips on the front end, hawkeye headlights and razor-thin LED-accented wing mirrors. The S-Cross also features a dark chrome mesh front grille, front skid plate, flared wing arches and brash 20-inch chrome wheels. Both two and four-wheel-drive versions will be available. There’s also a possibility of a hot Sport model. Senior engineer Yasushi Sasaki told Auto Express: “We want to see the demand first, but the platform can be adapted to that.” While the SX4 is based on the old Swift, the S-Cross is built on an entirely new platform. And it will spearhead a Suzuki crossover product offensive. Suzuki executive general manager of global marketing, Kenichi Ayukawa, told Auto Express the company plans to launch one new crossover model every year, starting from next year, for the next four years. One of those models will be an SX4 replacement, but there will be at least one other brand-new car, developed from the same platform as the S-Cross, as well as a city-car crossover. Ayukawa said: “We believe the trend for crossover vehicles will continue for a while, because the passenger car market is very quiet. People want crossovers, not just in Europe, but in Asia and around the world.” And there is a particular focus on crossovers in the UK. Suzuki general manager of dealer development, Dale Wyatt, said: “Crossovers and SUVs allow us to access families – it’s our fastest-growing area. “We think if we can have a family-car crossover with a competitive family-car price point, that that will be a nice sweet spot for us.”