The Suzuki SX4 is a supermini with chunky off-roader looks, which offers a high-driving position, low running costs and lots of kit 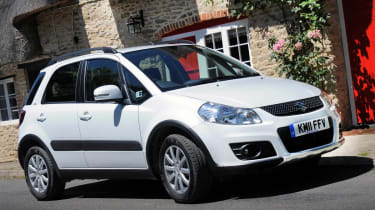 The Suzuki SX4 is available as a five-door hatchback or saloon, and is basically the same car as the Fiat Sedici. There's just one petrol and diesel engine to choose from, but a four-wheel-drive version is available and every SX4 comes with plenty of equipment. The 2.0 diesel is only available with all-wheel drive, but it offers decent fuel economy and is cheap to tax, too. The boot is small on the hatchback version, but its tall and narrow shape means it's perfect for bulky items like pushchairs. It drives surprisingly well and it's comfortable, too.

The 2.0-litre diesel offers the lowest running costs, with average fuel economy of 53.3mpg and CO2 emissions of 139g/km, which means road tax is reasonable. The 1.6-litre petrol with the manual gearbox manages 45.6mpg and 141g/km of CO2. But if you opt for the automatic 'box, then you'll struggle to return much more than 40mpg and emissions are 155g/km. The four-wheel-drive version is said to be able to do 43.5mpg and emits 149g/km, which is pretty good. Servicing costs should be quite reasonable, too.

The SX4 looks a bit like a shrunken off-roader, with big chunky bumpers, bulging wheel-arches, front and rear skid plates, rugged side protection mouldings and black roof rails. And the saloon version looks even more distinctive. The 2010 facelift brought improvement in the cabin, including new digital readouts and the plastics are robust, although they are hard and shiny which makes them feel very cheap. There are four trim levels: SZ3, SZ4, SZ5 and X-EC. All versions come fitted with electric front windows, air-con, electrically adjustable door mirrors and steering-wheel mounted audio controls as standard. SZ4 trim adds 16-inch alloy wheels and keyless start, while range-topping models get a sat-nav, Bluetooth and USB connectivity.

The SX4 is only a four-seater but passenger space is good. It has a 270-litre boot, but this increases to 625 litres with the rear seats folded. The small boot, while not particularly deep, is very tall - this means you should easily be able to fit a buggy in there. The saloon version has a far bigger boot, at 515 litres, and can seat five adults. The high-driving position is good, but the thick A-pillars cause big blind spots. There's plenty of useful storage around the cabin, including three cup holders, a good-sized glove box and space for big bottles in the door bins. There's also a useful hook in the boot to keep shopping bags in place.

The Suzuki SX4 received a four star crash test rating, with three stars for child occupant and three starts for pedestrian protection. All models come fitted with ABS, electronic brakeforce distribution and driver, front passenger, side and curtain airbags as standard. Suzuki finished a disappointing 26th out of 30 overall in the 2012 Driver Power reliability survey, which suggests build quality isn't as good as it once was. The SX4 has been the subject of one recall, which was for a faulty parking brake. Every Suzuki comes with a three year, 60,000-mile warranty. 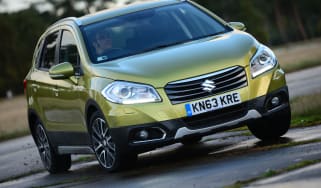