We drive the updated Suzuki SX4 S-Cross, and find it’s significantly better than the car it replaces 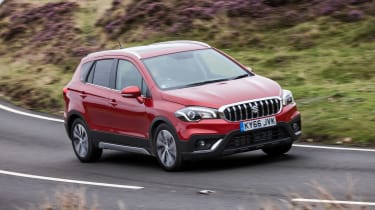 We’ll let you make up your own mind on the new styling, but underneath the SX4 S-Cross is a significantly better car – mainly thanks to the new 1.0-litre turbo petrol engine. It’s cleaner, punchier and more refined than the unit it replaces, while the Suzuki’s improvements to the suspension and interior are also welcome. It’s still not the most desirable or plush crossover of its kind, but it is a lot of car for the money.

Since the arrival of the new Suzuki Vitara last year, the competent but rather drab-looking SX4 S-Cross has been largely ignored. It hasn’t helped, either, that the two models share a puzzlingly similar space in the crossover market.

Now though, Suzuki has given the SX4 S-Cross a significant restyle with the aim of making it look more like an SUV. It also benefits from a boost (in more ways than one) in the form of two new turbocharged petrol engines. We’re trying it with the smaller 1.0-litre ‘Boosterjet’ unit to see if it can become a credible cut-price alternative to the Nissan Qashqai. 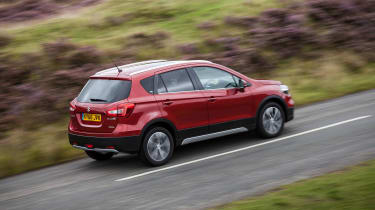 Undoubtedly, the first thing that will catch your eye is the new front end. The bonnet has been raised, with a chunky clamshell design, and the nose is more upright to give it a “stronger and bolder road presence”, according to Suzuki bosses. We’re not so sure – to our eyes that big chrome grille sits a bit awkwardly with the lights and bonnet, but we’ll concede that it’s more distinctive than the anonymous looks of the old car.

That’s the main change to the exterior of the SX4 S-Cross, but look harder and you’ll spot a few more. There’s redesigned lower body cladding and front air intakes, fresh alloy wheel designs, LED headlights and LED tail-lamps, too. Additionally, the suspension has been jacked up by 15mm to further bolster the illusion that this is a fully-fledged SUV. 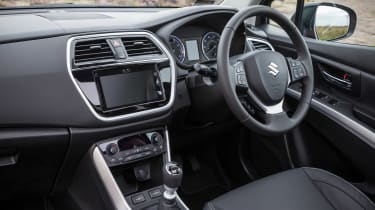 Inside, there are small improvements to the dash, with soft touch plastic, gloss black trim surrounding the touchscreen and the option of some brighter materials throughout. There are still plenty of scratchier materials on the doors, upper dash and many of the touch points, but it’s all well screwed together.

Suzuki has also grafted in the infotainment system from the Vitara, which is bigger and easier to operate in the move than the dated old unit. It’s a pity, then, that the screen graphics already look a little cheap. Overall, despite improvements the SX4 S-Cross is still more functional than desirable inside and out. That’s not the whole story, though, as there’s more to this Suzuki than meets the eye.

For starters, it’s more spacious than most crossovers in this price bracket. There’s ample room for a six-footer to sit behind a similarly sized driver, headroom is decent, while Suzuki has freed up another 10 litres of space in the boot (up to 440-litres and more than a Nissan Qashqai), thanks to a reclining backrest.

It’s also surprisingly enjoyable to drive. The 110bhp 1.0-litre Boosterjet unit replaces the old naturally-aspirated 1.6, and we think it’s the pick of the new range. It feels eager, mainly thanks to the S-Cross’ slim 1,160kg kerbweight. As a result the S-Cross feels faster than its conservative 0-62mph time of 11 seconds suggests. 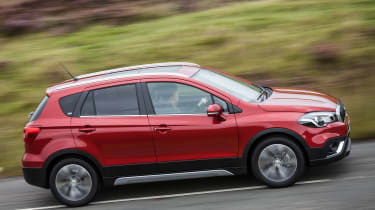 It’s not as torquey low-down as the 1.0-litre engine in a SEAT Ateca, but it’s flexible, willing to rev and sounds pleasant, too. Combine that with very competitive fuel economy figures and CO2 emissions, and the diesel engine makes much less sense than before. You can even spec this engine with Suzuki’s ALLGRIP selectable four-wheel drive for an extra £1,700.

It even handles well. Granted, a Mazda CX-3 is more composed, but the S-Cross feels more nimble than before. The body is stiffer, while the suspension has been tweaked to improve stability and comfort. Body roll is noticeable when you push it, but it’s grippy and agile. Rough roads and sharp low-speed bumps occasionally unsettle it, however.

The Suzuki’s real appeal lies in the value it offers. Despite being not far off a Qashqai in terms of size and interior space, it’s priced to compete with the smaller Nissan Juke. It starts from just £14,995, while our mid-spec SZ-T is £19,499 and comes with sat-nav, front and rear parking sensors and a rear-view camera, dual-zone climate control, LED headlamps and 17-inch alloy wheels.