Tesla Cybertruck unlikely to come to UK, but a smaller version could

Tesla’s all-electric stainless steel Cybertruck pick-up promises a range of over 500 miles and a 0–62mph time of 2.9 seconds, and while it's unlikely to come the UK, a smaller "Wolverine" version might. 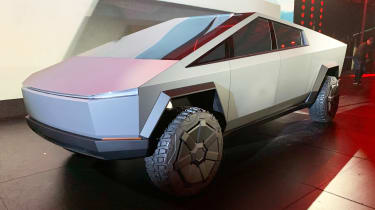 After the dust had settled following the unveiling of the Tesla Cybertruck, two of the first questions many asked were: a) how will a vehicle that is nearly six metres long and over two metres wide work in countries with smaller roads than North America? And, b) how will such an angular vehicle make it past stringent European type approval, and pedestrian impact tests in particular?

If Tesla boss Elon Musk's latest comments are anything to go by, however, the answer to both of those questions is: it won't.

Speaking during a Q&A session at Tesla's annual Battery Day conference, Musk said that while orders for the Cybertruck are "gigantic" at well over half a million, and he predicted production capacity to be "at least 250,000 to 300,000 a year, maybe more", he also indicated the vehicle may well not make it past regulators outside the United States.

"We are designing the Cybertruck to meet the American spec," Musk said, "because if you try to design a car to meet the superset of all global requirements, it basically, you can’t make the cybertruck, it’s impossible."

Saying the Cybertruck "really is designed for the American market" as this is the world's largest market for large pick-up trucks, Musk said Tesla is considering building a smaller version of the Cybertruck for countries without such wide roads.

"We’ll probably make an international version of Cybertruck that will be kinda smaller, kind of like a tight Wolverine package", Musk said. While no further details were given of what he meant by "Wolverine", one of the heavy-lifting robots at Tesla's factory in Fremont, California, is named after the X-Men character.

Musk promised that  any international Cybertruck that may emerge will "still be cool", adding: "But it’ll be smaller, because you just can’t make a giant truck like that for most markets."

The all-new Tesla Cybertruck is an angular, stainless-steel-bodied utility vehicle with bulletproof glass and a claimed maximum towing capacity in excess of six tonnes. When it goes on sale towards the end of 2021, it’ll be priced from $39,900 in the US.

American customers can pre-order a Tesla Cybertruck now by placing a fully-refundable deposit of $100. Following the pick-up’s launch, Tesla’s CEO, Elon Musk announced on Twitter that more than 250,000 customers had placed orders for the new model. Then he released a video showing the Tesla Cybertruck pulling a Ford F150, America's best-selling pick-up truck, that's caused some controversy online.

Despite looking like a prop from a sci-fi movie, the Cybertruck will do everything the most popular US market pick-ups can do, according to Musk. He claimed that it can carry a payload of up to 1,587kg and tow up to 6,350kg. It also comes with lockable 2,832-litre load bed, which can carry items up to 1,981mm long.

Musk promises the pick-up will be handy off-road, too, with 406mm of ground clearance, an approach angle 35 degrees and a departure angle of 28 degrees – which is better than the current Ford F-150. There’s also a range of new traction control settings which have been designed to simulate mechanical locking differentials.

The range-topping Tesla Cybertruck will be priced from $69,900 in the US (around £54,000) and will feature a tri-motor, all-wheel-drive electric powertrain and a large battery pack, adapted from the Model X SUV. It will boast a 0–60mph time of 2.9 seconds, a top speed of 130mph and a claimed maximum range of 500 miles. 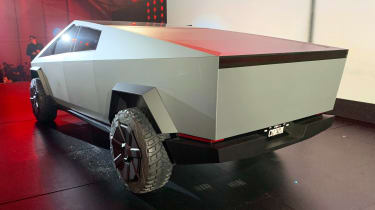 Entry-level, Single Motor, rear-wheel-drive Cybertrucks will start from $39,900 in the States (around £31,000). It has a claimed 0–60mph time of 6.5 seconds and a top speed of 110mph. However it’ll be fitted with a smaller battery pack than the flagship model, which means it will only cover 250 miles between charges and can only tow up to 3,402kg.

Like the Tesla Model X, the Cybertruck rides on air suspension which allows the rear of the pick-up to be lowered to make loading and unloading easier. The pick-up is also fitted with a retractable ramp, which was demonstrated with a rebadged and rebodied Yamaha ATV driving across the stage and into the bed. 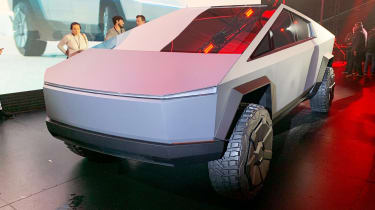 There’s still a considerable amount of conjecture over the Cybertruck’s angular design, with many publications remaining doubtful over whether it will pass the pedestrian safety aspect of US crash regulations.

However, Musk claims the Cybertruck will be the toughest pick-up on the market, thanks to a body made of ultra-hard 30X cold-rolled stainless steel. Tesla’s design boss, Franz von Holzhausen, demonstrated the strength of the pick-up’s body by attempting to dent one of its doors with a sledgehammer.

The Cybertruck will also be fitted with Tesla Armour Glass – an ultra-strong polymer-layered composite, which Elon Musk described as “transparent metal.” Its on-stage demonstration didn’t go as smoothly as the bodywork’s as, when Holzhausen threw a heavy metal ball at the pick-up’s front and rear door glass, both windows cracked. Musk admitted to the crowd that there was “room for improvement.”

Inside, there are two rows of three seats, with the centre front seat folding flat to make an armrest. And as is usual for Tesla, the dash features just a single 17-inch landscape touchscreen sitting on top of what looked like a marble-effect panel stretching the entire width of the car with no other visible controls. 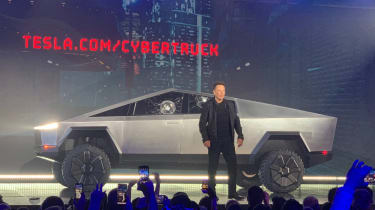 The steering wheel is similar to that in the Tesla Roadster with its flat bottom and cut-off top. The rear-view mirror is a screen, rather than a conventional glass unit, which uses a feed from a high-definition camera in the tailgate, while the roof glass roof extends back over the rear passengers who get a view of the steel-clad load bed.

As with all US-market pick-ups, the Tesla Cybertruck is big, measuring 5,885mm in length, 2,027mm wide and 1905mm high. That won’t shouldn’t stop Tesla bringing the car to the UK, though, with production of the Single Motor and Dual Motor cars set to start towards the end of 2021 and Tri Motor production starting a year later.

Do you like Tesla Cybertruck? Let us know in the comments section...