CEO Elon Musk predicts that Britain will be a key market and R&D hub for Tesla, despite concerns over electric car infrastructure 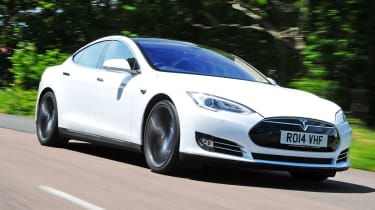 The UK could be Tesla’s biggest European market, and between its third- and fifth-strongest market worldwide, according to CEO Elon Musk. Speaking at the handover of the first five right-hand drive Model S cars to British owners, Musk voiced optimism for his electric super saloon’s future in the UK, despite the struggle electric vehicles (EVs) have had eating into conventional car sales.

Musk said “At the moment, Norway is our biggest [non-US] market, but we’d expect the UK to overtake that, given the larger population.” According to the Tesla boss, there’s currently a four-month waiting list on a new Model S.

Musk also confirmed the UK will be the base for a brand new Tesla R&D centre, which could even precede a vehicle assembly plant in Britain – if demand is high enough. “We’ll have an R&D centre here before a factory”, Musk said.

“We’ll have our first European factory in continental Europe, perhaps the Netherlands, but it makes sense to have one in the UK once we’re producing more than 500,000 units. But the factory needs to be running at full capacity [to be viable].”

“I’d say Model S is more European than American in design and handling. Most of the set-up work was done by British guys!”

Responding to queries about the lack of ‘Supercharger’ fast-charging units in the UK, Musk said that “if you were to order a Model S today, by the time it arrives, we will have the whole of the south of England covered by Superchargers”.

The Superchargers offer a 135kW battery replenishing supply, giving a half-charge in just 30 minutes. The Superchargers are usable free of charge for Model S owners (the only EVs compatible with the system), and will cover the whole of the UK by the end of 2015, according to Musk.

“Superchargers will always be free because, relatively, it doesn’t cost that much to charge a car”, promised Musk.  “Plus, we have very low maintenance so we save costs there. I like the idea that your wallet stays in your pocket after you’ve bought the car. We’re not actually paying much rent for our Supercharger sites. In some areas, we’re actually being paid [for using the land].” 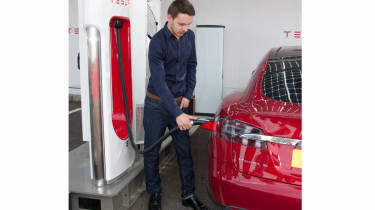 Between eight and ten Superchargers are planned at London’s ‘Crystal’ building at Royal Docks, where the customer/car handover took place. That means London will join an exclusive list of urban hubs with Superchargers within the city limits – other such cities include Beijing, New York, and soon, Shanghai.

Tesla-founder Musk, who made his fortune with online payment system Paypal, is also the creator of solar panel business SolarCity. The South African-born entrepreneur hinted that progress with solar-powered charging could lead to free-of-cost Tesla ownership in the future.

Quizzed over a new, more affordable Tesla, Musk reassured that a cheaper car, thought to be a BMW 3-Series and Jaguar XE rival, is coming within three years. He predicted it will cost “around $35,000, or £25,000” but the cheap running costs will equate to it being a “£15,000 - £20,000 car”. The Tesla supremo also confirmed the purported ‘Model E’ name isn’t going to adorn the 2017 production car.

Meanwhile, the Model X crossover will see its first US deliveries in late 2014 and reach the UK in right-hand drive in late 2015. A Tesla insider confirmed to Auto Express that the concept car’s vertically opening  ‘falcon doors’ will definitely make production.

Read our first UK drive review of the Tesla Model S here and check out our pick of the best electric cars on sale now.