The Toyota Tj Cruiser combines elements of a van and an SUV in its make-up, and it could make production 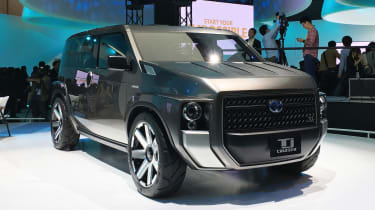 A positive response to Toyota’s Tj Cruiser at the Tokyo Motor Show could persuade the Japanese manufacturer to put the novel SUV-van crossover into production, it has emerged.

The Tj Cruiser is designed for ultra-active buyers who, Toyota claims, are happier to pay a little more for a product that will last longer. It’s an ultra-rugged proposition that has a potential load length of up to three metres (thanks to a front passenger seat that folds down as flat as the rears), and bodywork and interior materials that are designed to be resistant to scuffs and scrapes.

The vehicle’s name is inspired by a toolbox (T), joy (j) and Cruiser, a badge that has traditionally appeared on Toyota’s SUVs. It’s designed to be based on the next generation of Toyota’s TNGA platform architecture, would offer front- and four-wheel drive, and would be powered by either a 2.0-litre petrol engine or a hybrid set-up like the Prius. 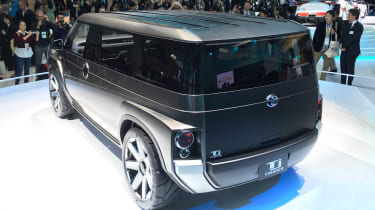 Mai Takeuchi from Toyota’s business and operation planning division admitted that “it could be possible to produce this car” but added, “This model is a concept vehicle. We don’t have any plans for selling it. We’d like to sound out the feelings of visitors to the Tokyo Motor Show. We want to test the reaction to the design.”

Inside, there are funky folding seats which can make a smooth, flat loading area that’s designed to be useful for anyone from families to tradespeople. The 3-metre long bed also features multiple anchoring points to secure cargo and an area under one of the passenger seats to store smaller items of shopping.

There is a large tailgate which adds practicality and could provide much needed shelter for users who take the Tj on rainy rural excursions, such as dog walking. The Tj also has rear sliding doors to make it easier to load cargo and people into the back, this also reduces the chance of accidentally denting other cars when people exit. However, while the SUVan appears to offer great space and practicality, the concept does have one glaring flaw: there are only four seats.

Would you be interested in the Toyota Tj? Let us know in the comments below...