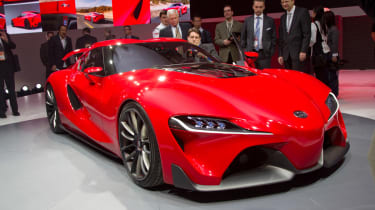 Toyota has gone back to its performance car roots with an incredible new front engine, rear-wheel drive sports car concept at the Detroit show. Called the Toyota FT-1 (stands for ‘Future Toyota’) the concept will be available to download and drive on racing game Gran Turismo 6 from tomorrow.

Whether it will make production, though, is less clear. At this stage Toyota is calling it a purely a styling exercise, and an excuse to let the design team express themselves.

However, Kevin Hunter, President of Toyota’s CALTY design studio that is responsible for the FT-1, hasn’t ruled out making it a reality. “We always like to see our concepts as having a purpose,” Hunter told us.

“The next step is to see what the publics thinks and take it from there.” Another Toyota spokesman went one step further: “The plan is to gauge a reaction at take the plan from there. Personally I think the show is enough time to get a good idea of the reaction.”

Design work on the concept started just under two years ago and draws on Toyota’s history of fast cars, including the 2000 GT, Celica and Supra.

At the front, a single-seater style central pontoon nose dominates the FT-1’s looks. Beneath it is a grey front splitter, flanked by a pair of huge air intakes.

The narrow LED headlights blend into more vents, which appear to act as ducts to cool the front brakes.

Further up the bonnet, there are vents behind each rear wing to help remove hot air from the engine, while the engine can be seen below a glass panel in the bonnet.

The roof has a double-bubble shape, while the wraparound glasshouse is designed to reference the look of the old 2000GT.

The car’s tail is similarly sculpted. There’s a small spoiler built into the shape of the tail, while a larger wing automatically rises on slender supports. The boomerang taillights sit just below a pop-up spoiler and above twin exhausts and a deep diffuser.

Hunter called the FT-1’s design a “symbolic new chapter for Toyota design,” and revealed the aim with the FT-1 was to produce a car “liked by everyone,” but that “stirs emotion.”

The interior is just as dramatic, with a dash and centre console that envelops the driver. A beautifully-crafted F1-style steering wheel lets the driver keep his hands on the wheel at all times, while a next-generation colour head-up display project vital information into the driver’s line of sight.

To ensure optimum ergonomics, most of the car’s major controls are mounted on the steering wheel.

There’s no word on which engine is sitting underneath the transparent engine cover, but Toyota has confirmed it’s not a hybrid, but a “high-output” internal combustion engine. Toyota is currently working with BMW on a join hybrid sports car platform, but according to bosses the FT-1 is not linked to that in any way. 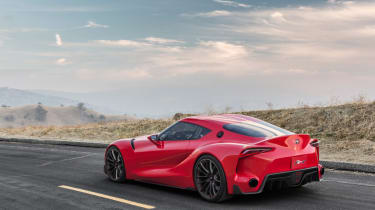 When introducing the car, Hunter said, “This car is a symbol of Toyota’s design future. Toyota CEO Akia Toyoda challenged us to design a car that said ‘I want this. I have to have this.’ The result is the FT-1.”

The car has been guided by Toyota’s new design ethos, called Vibrant Clarity, and by a directive from the CEO, which aims to “invigorate Toyota products with energy, passion and “Waku-Doki” (which means ‘a palpable heart-pounding sense of excitement’,’ in Japanese).”

Hunter added “Sports cars represent the ultimate driving expression in its purest form. As car enthusiasts ourselves, this is the kind of project we dream about working on.”

“Beyond its obvious fire-alarm visual impact, FT-1 is symbolic of a new chapter for Toyota Global Design. This provocative concept truly captures the passion, excitement, and energy of the Toyota we are evolving into and embodies elements of the emotion and performance that Toyota will imprint upon future production designs.”

Toyota collaborated with Gran Turismo to create a virtual FT-1. This allowed CEO Akio Toyoda to drive the car virtually in the game at Fuji Speedway. He beat the time his set in his own LFA, and gave the design team the thumbs-up to show it at Detroit. The car will be a downloadable vehicle for GT6 from tomorrow.

Star of the show so far has to be the Toyota FT1. Looks gorgeous #NAIAS2014 pic.twitter.com/A26WwBYl9A