Spot the difference... We’ve traded up to new, revised version of hatch. Is it a significant improvement? 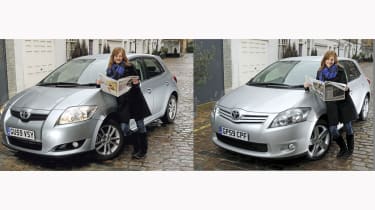 Are you ready to play a game of spot the difference? I recently handed back the keys for Auto Express’s long-term Toyota Auris 1.33 TR, and swapped them for a set to the virtually identical, facelifted version. Our new car is a sportier 1.6 SR – but as you can see from the pictures, the changes Toyota has introduced as part of the revamp aren’t that dramatic.

You will notice the bonnet, grille and headlamps have all been subtly altered. Plus, the bumpers are revised, there are new tail-light clusters and the fresh door mirrors incorporate indicator repeaters. Our SR adds a neat roof spoiler and 17-inch alloy wheels. Overall, the tweaks result in a slightly sharper look, although the Auris still struggles to stand out from the crowd.

I had been hoping for a big change inside – Toyota could have answered my biggest criticism of the hatchback by removing the irritating centre console. Unfortunately, my luck wasn’t in! Although the set-up has been subtly reworked – and is less intrusive – for me it’s still a jarring piece of design.

Nevertheless, the perfectly placed gearlever remains, while the handbrake is set lower, so it’s easier to operate. Other tweaks include the introduction of soft-touch materials and a new flat-bottomed steering wheel that’s finished in textured leather. Also welcome are the classy dials, with an analogue fuel gauge instead of the frustrating digital display. And my daughter is happy now as she can listen to her iPod by plugging into the new USB/aux input.

I’m hoping the firm hasn’t changed its excellent reliability, ease of use and versatility. So far, the Auris is shaping up as a great addition to the family. And if we take another picture when it returns to Toyota, the biggest difference is likely to be the frown on my face – as I’ll really miss it!

“The new 1.6 SR is as capable and practical as our pre-facelift 1.33 – and not surprisingly, it’s very similar from behind the wheel. The styling tweaks improve the looks, although I think the update is too subtle to leave much of a lasting impression.”