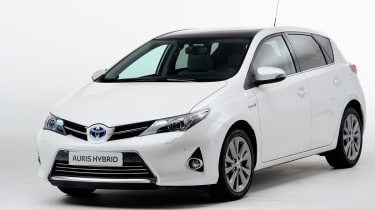 Toyota has revealed its all-new VW Golf fighter, the Auris. To get the full story behind this hi-tech hatch, we went to meet it during an exclusive photoshoot.

The Auris is the company’s best-selling car in Europe, so the latest model needs to tick all the right boxes.

Complaints about the outgoing car’s bland styling have been addressed, with a more angular look boasting narrow headlights and bold feature lines.

At 55mm lower and 30mm longer than the car it replaces, the new Auris has a far sleeker profile, too, despite using the same underpinnings as its predecessor.

The cabin has a cleaner design and extra soft-touch materials, to boost quality. Plus, there’s more space, with a 360-litre boot – up from 334 litres.

Crucially, the battery pack on the Hybrid seen here is now underneath the rear seats, so boot space is identical to other models in the range.

Toyota CEO Akio Toyoda told his team to build more character into its cars – something the outgoing Auris is short on – and designers and engineers have obliged. “Europeans drive their car actively,” said Toyota Europe’s vice president of product management Alain Uttenhoven. “They like cars to reflect this.”

To liven up the handling, the Auris has been made 14 per cent stiffer and 40kg lighter on average. A 20mm lower centre of gravity helps boost agility. The driving position is now 40mm lower, with a more vertical steering wheel.

Toyota says that as well as a more efficient version of the 1.8-litre petrol-electric Hybrid, there will be 1.33-litre petrol and 1.4 diesel models. The Auris will debut at September’s Paris Motor Show, and goes on sale early next year, with prices expected to start from £13,000.

Welcome to our Paris Motor Show hub page. Scroll down for all our Paris content...
New Toyota Auris pictures leak 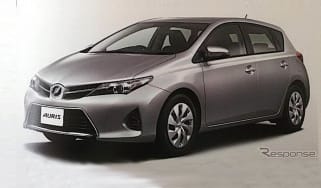