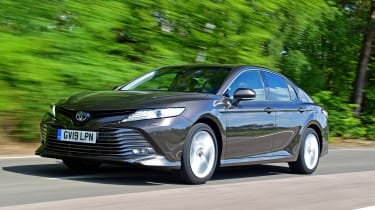 The Camry’s design doesn’t exactly scream kerb appeal, but it’s modern and handsome. Fit and finish is great throughout, while the functional and practical cabin only just trails rivals for outright quality.

The dashboard itself is clear and logically laid-out for the most part, but the central infotainment screen is a big letdown. Overall equipment levels are good, but Camry doesn’t feel especially upmarket inside. It’s a shame that Toyota hasn’t managed to inject a little verve – step from the Camry into a Peugeot 508, for example, and the contrast in design and overall appeal is stark.

The infotainment system is Toyota’s Achilles’ heel and customer feedback proves as much. Things are improving with its latest generation of vehicles, and the Camry shows where these gains have been made, thanks to the sharper graphics on its seven-inch touchscreen. 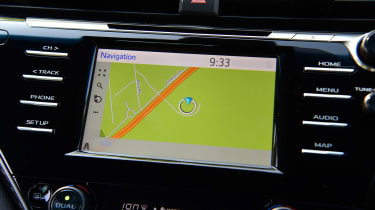 However, it’s still fiddly to use compared with rivals’ setups and can be slow to respond to inputs, while it lacks the latest connectivity technology, such as Apple CarPlay and Android Auto. For drivers who are likely to spend plenty of time at the wheel in machines like this, that omission blots the Camry’s copybook.

Instead, alongside Bluetooth and DAB radio, you get the clunky MirrorLink system to connect up your smartphone. This doesn’t work very well and both the systems in the Vauxhall Insignia and Skoda Superb are more flexible and better integrated into the cabin, too. However, there’s a central display set between two traditional dials in the instrument cluster which is usefully bigger than that found in the Skoda.