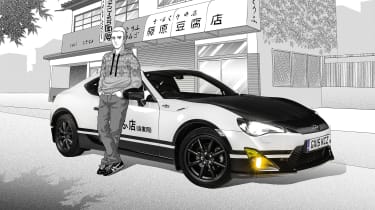 There are many who see the Toyota GT 86 as a spiritual successor to the iconic Corolla AE86 and it’s easy to see why. The two cars share the same emphasis on fun and rear-wheel-drive handling without going overboard on power. Now, Toyota has strengthened the connection further, by unveiling a special GT 86 Concept – which harks back to a very special AE86.

The Corolla AE86 in question features in Initial D, a Japanese anime series and manga graphic novel. In Initial D, the hero, Takumi Fujiwara, famously drives a modified AE86 as he drifts on mountain roads while delivering tofu. That car’s livery makes its way onto the GT 86 Initial D Concept, including a monochrome paint scheme. Painted on the driver’s door is Japanese script, reading ‘Fujiwara Tofu Ten’ – translated to Fujiwara Tofu Shop, referencing the anime. 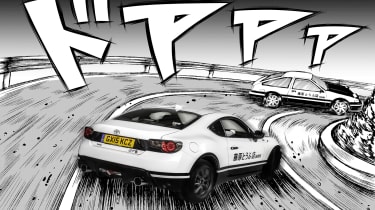 The devil is in the detail, though, and Toyota has fitted the GT 86 with new versions of the same Japanese aftermarket components featured on the original. These include custom RS Watanabe alloy wheels, TRD suspension, a Fujitsobo exhaust system, and a carbon-fibre bonnet.

Our Initial D GT86 is an actual thing https://t.co/2eVpd9piRf pic.twitter.com/t9TqQysk25

There’s also yellow tinted foglights which ape the original aftermarket units, and a silver engine cover which is a nod to the AE86’s original engine.

Finally, carbon-fibre door handles and mirror covers give an 80’s effect similar to the original car, and the removal of the boot spoiler and tinting of the rear lenses completes the look.

Toyota released images of this concept on a panoramic manga-style background, which was designed by UK-based artist Sonia Leong. Keep an eye out for the Toyota GT 86 Initial D Concept as it tours motoring events throughout Britain this summer.

Would you buy a manga-inspired GT 86? Let us know in the comments below...