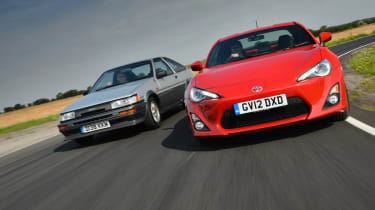 It’s easy for Toyota to claim that the GT 86 was inspired by the AE86, but the two share more than a number. Engineers have worked hard to recreate the crisp turn-in, neutral balance and purity of the Corolla, while making the GT 86 more usable on an everyday basis. Toyota could have another sports car hero on its hands.

Toyota has an enviable sports car history, with its models ranging from the MR2 to the Supra and the Celica. But when it introduced the GT 86 earlier this year, it drew inspiration not from the MR2 or Supra, but from the Corolla AE86 of the eighties – a car that’s become a cult hero thanks to its rear-wheel-drive chassis and pure driving experience.

But is the connection between the two little more than clever marketing? Or does the GT 86 really share DNA with a car that’s now more than 25 years old?

It’s not immediately obvious when you look at the two parked next to one another. True, they share a similar sporty profile and compact proportions, but the quarter-century between them definitely shows.

While the GT 86 is all creases, flowing lines and intricate details, the AE86 is made up of straight edges and is more of a wedge shape. The interiors are a world apart, too. A simple black plastic dashboard with a few knobs in the Corolla is replaced by a button-laden centre console set among brushed metal inserts and plenty of leather trim in the modern GT 86.

But the most important thing about these cars is the way they drive, and it’s here that the two really do feel similar – even down to their acceleration. While the AE86 is powered by a 123bhp 1.6-litre four-cylinder engine and the newer GT 86 by a 198bhp 2.0-litre boxer, there’s only seven- tenths of a second splitting the cars’ 0-62mph times. That means 7.6 seconds for the newcomer and 8.3 seconds for the AE86.

A shrill buzz comes from the small exhaust of the Corolla, encouraging you all the way to the 7,000rpm red line, while in the GT 86 there’s more of a bassy note from the boxer engine. It’s a much more grown-up sound, but equally encouraging.

Both gearboxes – a five-speed in the older car and a six-speed in the GT 86 – have a similar feel, with close ratios and accurate shifts. And while the new car seems far more agile than the AE86, with less body roll and quicker steering, both share the same perfect balance.

As you turn in to a fast corner, there’s an initial weight transfer before both cars settle, allowing you to trim your line through bends by either stepping on or off the accelerator.

The whole experience is so intuitive in the GT 86 that you can explore the car’s limits almost immediately. And in the AE86, you can quickly forget there’s no traction control safety net.

The similarities are so uncanny that it feels as though Toyota’s engineers had a Corolla on hand throughout the development process of the GT 86, just so they could recreate every little thing that makes it so much fun.

Have they succeeded? They’ve definitely created one of the most entertaining drivers’ cars on sale today. But we drove the AE86 more throughout our test, and if you asked us which one we’d take out for one final drive, it’d be the older car every time.

Ask us which one we’d like to live with every day, and it would be the GT 86. It’s comfortable and easy to drive, plus offers attainable and genuine thrills – and that’s what makes it such a special car. The GT 86 signals a bright future for Toyota sports cars, and all it took was a little nod to the past.