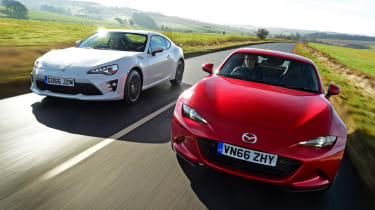 The Mazda MX-5 is an icon. It’s the world’s best-selling two-seater convertible sports car, and in fourth-generation form, Auto Express’ favourite roadster. But now there’s another choice if you don’t want a simple soft top.

Like the previous version of the car, the Mazda is now available with a folding hard roof. Called the MX-5 RF (which stands for Retractable Fastback), the Mazda is now a part-time tin-top, which means it goes up against one of the finest, most fun to drive sports cars on sale: the Toyota GT86.

A recent facelift for the GT86 has raised its game, although mechanically it remains unchanged, with nimble, rear-wheel-drive handling purity still at the core of the car.

In convertible form, the MX-5 had the edge over the previous GT86, so can the RF reign victorious here, too? 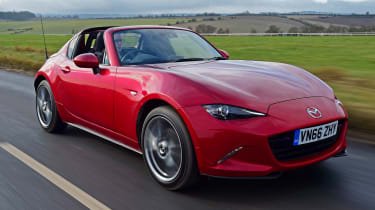 Folding hard tops are generally only found on high-end two-seat models like the Mercedes-Benz SL, or supercars like the Ferrari 488 Spider. But this MX-5 RF offers some of the appeal of those cars in a much more affordable package.

By adapting the standard MX-5’s design to accommodate the hard roof, Mazda has created something really rather unique in this sector. Unlike the Mk3 MX-5 RC, the RF has buttresses that slope down from the back of the cabin and into the slightly kicked up rear wheelarches.

The result is something discernibly different from its soft-top relative, despite sharing the same sharp-looking front end design. This is definitely part of the RF’s appeal, but you’ll have to really like the looks, as the intricate roof arrangement has added another £2,000 to the car’s price tag when compared with the standard car. 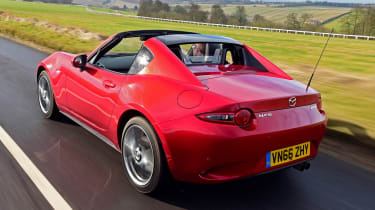 While the design gives the car another dimension visually, luckily it doesn’t do much to the way the MX-5 drives. It’s as brilliant as ever, with this 158bhp 2.0-litre six-speed manual model  sprinting from 0-60mph in 6.8 seconds on test. There’s a six-speed automatic offered exclusively for the larger-engined RF Sport Nav, too.

Even with the sportier Bilstein dampers and a strengthening strut brace fitted to this 2.0-litre Sport Nav model as standard, the Mazda’s chassis is softer compared with the Toyota’s, with more roll in corners. There’s plenty of grip available, though, while the steering is nicely weighted and geared at just the right speed for the damping set-up. 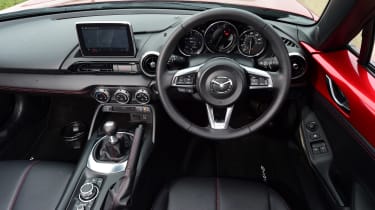 It makes the RF a fun and cohesive package, and with the 2.0-litre model’s limited-slip diff, the MX-5’s chassis offers just enough adjustability to change the car’s cornering line with the throttle. You can trim it with a lift or even a gentle brush of the brakes.

It’s comfortable enough on the move, and while material quality isn’t the best in some areas, the main touch points all feel well built. There’s a good level of kit on this trim, too, with navigation, DAB, Bluetooth, auto LED lights and heated seats all fitted. 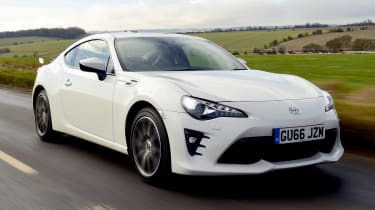 It’s a similar set-up to the MX-5 RF, although the Toyota’s 197bhp 2.0-litre four-cylinder engine is arranged in a flat ‘boxer’ configuration, rather than the Mazda’s more conventional in-line unit.

As a result, the motor’s bark gives the Toyota some of its distinctive character. The engine note is naturally enhanced and piped into the cabin, and while it’s not the sweetest sounding unit, it has plenty of presence on full throttle. 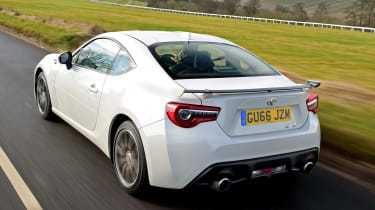 And you’ll need to use full throttle quite a lot, as while the GT86 produces 5Nm more torque than the MX-5, it’s delivered at a lofty 6,400rpm, which is just 1,000rpm shy of the rev limiter. On test, the 0-60mph sprint took 7.6 seconds – eight-tenths slower than the Mazda – but at least the transmission is a nice unit, so it’s no hardship to work the precise six-speed gearbox to keep the engine in its sweet spot.

Minor tweaks to the car’s springs and dampers, along with some strengthening of the body shell, are difficult to notice, but these revisions combine to contribute towards the Toyota’s fine handling and chassis balance. The suspension is firmer than the MX-5’s, so it corners flatter, and even fitted with lower grip conventional rubber on its 17-inch alloys, it feels just as fast and secure in corners.

The steering isn’t overflowing with feel and is heavier than the Mazda’s, but it’s also accurate and fairly quick, allowing you to place the car nicely and catch any slides easily. You’ll know when this extra work is needed, too, as the Toyota easily communicates when the chassis starts to move. 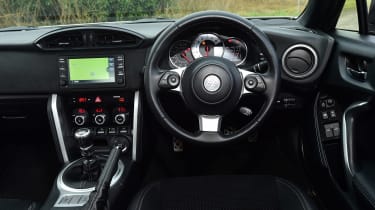 Inside, despite a few changes, it feels very similar to the pre-facelift car. The driving position is involving; you sit low with plenty of leg space, while all the control weights are well matched. However, even after these minor tweaks, the GT86’s cabin still feels a bit cheap with lots of hard plastics, while it doesn’t feel quite as luxurious as the MX-5, despite the Mazda’s tighter packaging and lower price tag.

The touchscreen multimedia system isn’t as slick as the Mazda’s unit, either, while sat-nav is a £750 option. You also don’t get parking sensors (£250), although LED headlights, cruise control, DAB, Bluetooth and climate control are all standard. The higher-spec GT86 Pro gets heated seats, too. 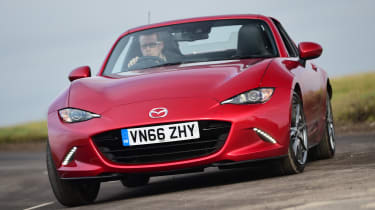 Mazda has sold more than one million MX-5s in its 28-year lifespan, and the RF should bolster those numbers. It has the GT86 beaten thanks to great dynamics and lower running costs. But the £2,000 premium over its soft-top stablemate is difficult to overlook. 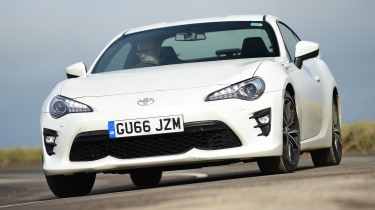 Exterior design changes aside, there’s little different to this facelifted GT86 compared with its predecessor – which is no bad thing, as the Toyota is still an affordable and fun sports car. But it’s not as cheap as the MX-5, nor is it as fast. It’ll also be more expensive to run, and doesn’t get the fun convertible roof.