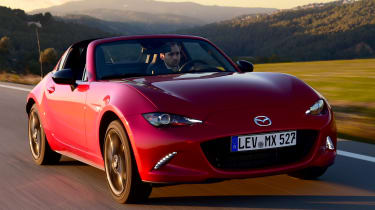 If anyone could be trusted to put a new spin on the roadster formula and come up with a winner, it’s Mazda. The MX-5 RF retains the agile and engaging setup of the standard model but comes dressed in a fancier frock. A £2,000 premium might seem a little steep when the soft-top is virtually faultless, but you do gain a bit of theatre along with a dose of extra roof-up refinement.

Since day one the MX-5 has always been a two-seat soft-top roadster. But that hasn’t stopped Mazda playing around with different bodystyles, concepts and special editions. For the first time in 10 years, however, the Japanese manufacturer has now launched a brand-new coupe-cum-cabriolet derivative called the MX-5 RF.

The RF refers to ‘Retractable Fastback’ – essentially an electrical folding hardtop. The idea to introduce the RF was in the plan from the very beginning, and with the previous-generation MX-5 Roadster Coupe accounting for 80 per cent of UK sales, it was a bit of a no brainer.

The roof, unsurprisingly, is the RF’s party piece. In place it looks like a coupe, but 13 seconds of tin-top origami, you have a beautifully proportioned open-top sportscar. The process is a real event – beginning with the rear buttresses arcing into the air while the roof peels back, before separating in two and neatly folding beneath the rear deck.

Unlike the soft-top you don’t have to manually unlatch the roof from the windscreen to start the process. It’s fully automated and can even be done on the move – so long as you don’t breach the 6mph limit. 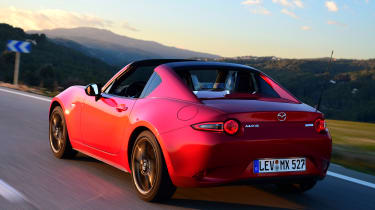 Around 45kg of additional weight has been added due to the roof’s folding mechanism, but little else has changed in transforming the MX-5 from a soft-top to a hard-top. As a result it’s agile, responsive and playful nature remains intact and as addictive as ever.

Climb inside and you’re greeted with the same slightly awkward driving position found in the fabric-roofed car. There’s no reach adjustment for the steering wheel, for example, while headroom for taller drivers is limited with the roof in place. The basic cabin architecture is also identical, although the RF has been designed to add a new layer of refinement to the MX-5, so you can spec a new leather finish for the dash. 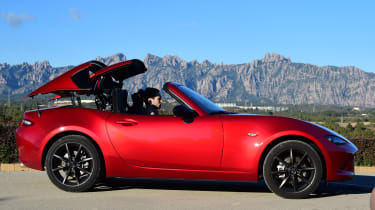 Another small change is the option of an automatic gearbox, which you can’t have on the soft-top. However, the bulk of RF’s will still be specced with a six-speed manual – paired to the more powerful 158bhp 2.0-litre engine. Spec-for-spec it’s around £2,000 more than a standard car.

As we know, that powertrain is already an effective combination. The engine only starts to get going above 3,000rpm and thrives on revs, but its rorty nature just encourages you to squeeze out everything it has to give. That weight penalty has had a slight impact on performance (0-62mph takes 7.4 seconds as opposed to 7.3 seconds) but if nobody told you you’d never know. It feels just as brisk.

One obvious difference between the RF and the soft-top is to be found on the motorway. While the rear buttresses may look the part, having roof down at higher speeds does create quite a lot of turbulence. Attempting to hold any sort of conversation in the cabin becomes very vocal, so you’ll quickly find yourself pulling over and raising the roof. When you do, it’s excellent and neatly cocoons you from the elements. 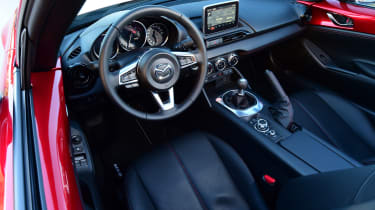 But as a sportscar it’s more at home on winding B-roads. To compensate for the marginal weight gain the steering has been tweaked and the suspension stiffened, but the setup remains quite soft and forgiving. Like the standard MX-5 turn into a corner and you’re greeted with quite a lot of body roll, but rather than prohibit you from exploiting the Mazda’s full potential the movement in the body lets you know exactly where the grip is and how much further you can push it.

On a practical level, the RF is no less useable than the standard model – meaning it still has its limits. The 130-litre boot is deep but not very wide, while the cabin is a little short on storage for your loose odds and ends.