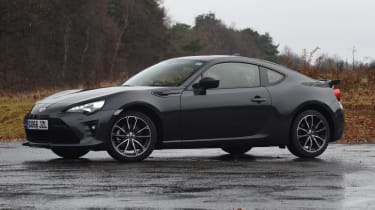 As soon as the GT86 arrived, it was critically acclaimed for its brilliant handling, but that was the icing on a very appealing cake. While many driver’s cars are compromised in terms of reliability, practicality or affordability, that isn’t the case with the Toyota. This really is a model that will suit a huge number of people unless ultimate practicality is key. The potential fly in the ointment is finding the right GT86 for you, because this isn’t a big-selling car in the UK. Owners also tend to hang on to them, so there aren’t huge numbers for sale at any one time. But as long as you’re prepared to travel for the right example if necessary, you should be able to source the GT86 of your dreams.

Ever since Toyota arrived in the UK in the mid-sixties, it has gained a reputation for building worthy family cars that focus on practicality and reliability rather than driver enjoyment. That’s despite the fact that over the years the brand has been responsible for several generations of MR2, Celica and Supra – cars aimed at the enthusiast.

The rear-wheel-drive GT86 is the spiritual successor to the earlier rear-driven Celicas, along with the Corolla GT that was loved by hot-hatch enthusiasts in the eighties. So when Toyota teamed up with Subaru to create a driver’s car par excellence, the goal was achieved; the GT86 proved you don’t need a lot of power to really enjoy every drive. 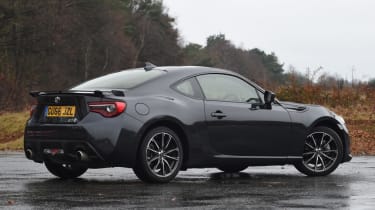 The first GT86s reached British roads in July 2012. There was only one trim level, and all cars had a 197bhp 2.0-litre flat-four petrol engine with either manual or automatic gearboxes, both with six ratios. A refresh in October 2014 brought a new entry-level Primo edition, a limited-run Giallo with metallic yellow paint, and the GT86 Aero, which added a bodykit. Tyre pressure monitoring became standard, too.

A Euro 6-compliant engine arrived in July 2015, while the GT86 Aero gained 18-inch alloys. A new Blanco special edition with pearlescent white paint and heated leather-trimmed seats joined the range, too. The car was more heavily revised in October 2017 with a stiffer bodyshell, retuned suspension, updated instrumentation and improved aerodynamics. There was also a GT86 Pro range-topper with leather and Alcantara trim.

Part of the pleasure of driving a GT86 comes from the deliciously precise gearchange, so while the auto box works well enough, and cars fitted with these have quite a following, most people will be better off buying the manual. Other than that, it’s a question of finding the best GT86 that you can afford. 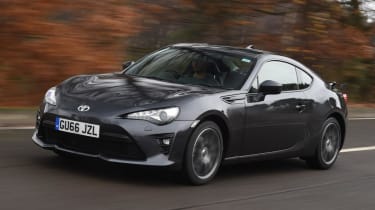 The standard car came with dual-zone climate control, sports seats, bi-xenon headlights, powered folding door mirrors with electric adjustment, and 17-inch alloys. Sat-nav was an option, along with leather and Alcantara-trimmed heated front seats, although some special editions got these as standard. Another option worth seeking out is the nine-speaker JBL sound system.

Alternatives to the Toyota GT86

The obvious alternative to the GT86 is a Subaru BRZ, because it’s the same car with a different set of badges. The Subaru is rare, though; we found only 65 for sale, virtually all of them priced at £15,000 or more.

Audi’s TT is a hugely desirable sports car, with four-wheel drive on some models. It’s good to drive, although not as engaging as the Toyota, but you can buy one in coupé or roadster forms, with either petrol or diesel engines, and manual or auto transmissions.

The Volkswagen Scirocco also offers hatchback usability and a decent choice of engines or gearboxes, but this isn’t as much fun as the Toyota, either. The Nissan 370Z is another contender, with its muscular V6 engine and rear-wheel drive, but it’s thirsty.

The manual box’s change into second gear can be particularly obstructive, especially until the oil has warmed up.

Several owners have had problems with batteries going flat because of incorrectly wired heated seats, so ask vendors about this.

Squeaky stoppers seem to be a fact of life for many GT86 owners, with effective fixes proving elusive; listen out for noisy brakes during a test drive.

The seat bolsters aren’t as durable as you might hope; they can wear through in fewer than 20,000 miles, so check for damage here.

For a brilliant driver’s car the GT86 is fairly practical, because while the rear seats are only really suitable for children, they fold down to boost the 237-litre boot. The cabin design seems dated in places and some materials don’t look or feel of premium quality, but the seats are grippy and supportive, the available equipment ticks the right boxes and all the controls are user-friendly enough. 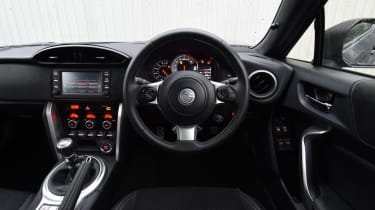 All GT86s have to be serviced every 12 months or 10,000 miles. The schedule simply alternates between minor and major, priced at £250 and £395 respectively. The major service includes a brake-fluid change, because that’s due every two years or 20,000 miles, while the coolant should be replaced after the first 100,000 miles or 10 years, then every 60,000 miles or six years.

The cost of this is included in the major service, and because the engine is chain-driven, there’s no cambelt to replace, which helps to shave running costs. Once a GT86 hits its fifth birthday, it’s eligible for membership of the Toyota 5+ Club, which knocks 20 per cent off any maintenance or MoT performed by an official dealer.

Toyota has issued two GT86 recalls. In October 2016, 4,556 cars built from April 2012 to March 2015 were called back because the steering power assistance could be lost. The fix is a new wiring harness. A recall in April 2019 affected 3,505 GT86s made from April 2012 to May 2013, with potentially faulty valve springs leading to possible engine damage. Stronger springs are the fix.

The GT86 hasn’t appeared in our Driver Power surveys, but Toyota came 10th in our 2019 brands poll. Even more impressive are owner ratings across the reviews on our sister website carbuyer.co.uk; virtually all the write-ups give the Toyota a full five-star rating. Owners love the handling, rarity, reliability, practicality and value – and dislike virtually nothing.