New Toyota Proace is launched at CV Show in Birmingham 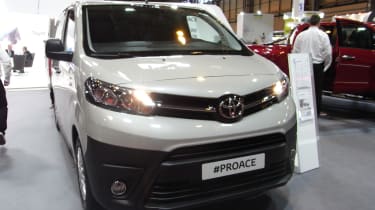 Toyota has unveiled its new Proace panel van at the Commercial Vehicle Show in Birmingham.

Toyota unveiled the Proace Verso people-carrier at the Geneva Motor Show earlier this year alongside its siblings, the Peugeot Traveller and Citroen Spacetourer. However, stuffed to the rafters with nine seats and various luxury trimmings, the vehicles wouldn’t have been much cop ferrying around construction materials or boxes for delivery - but now, the practical people-carriers have been turned into workhorses, and Toyota has followed the Citroen Dispatch and Peugeot Expert out of the blocks with the Proace van. 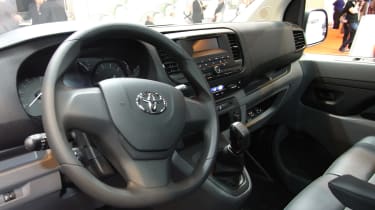 The Proace aims to cover as much of the panel van market as possible by providing plenty of choice – the van is available with a choice of three body sizes, two wheelbases, various different body styles and five engines, each with a selection of transmission options. There’s even a nine-seater shuttle for those who want plenty of family practicality without the pricetag of an MPV.

The range opens with the Proace Compact – the shortest vehicle in the segment at just 4.6m long and on a 2.9m wheelbase. The medium and long versions sit on a 3.2m wheelbase, and are 4.9m and 5.3m long respectively. All vans come with side sliding doors – wide enough to accept a Euro pallet on the medium and long bodies – and a choice of swing doors or a lift-up tailgate.

Engines will be 1.6 and 2.0-litre diesels, with power outputs ranging from 94bhp to 178bhp – the same as its people-carrier siblings, and comparable to the Proace's rival the Volkswagen Transporter. Fuel consumption is a strong point – even the thirstiest Proace still achieves 47.9mpg fuel economy. 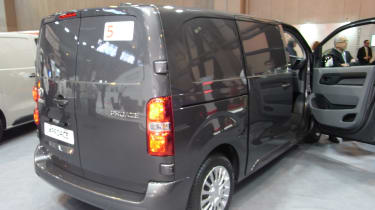 The van will be available in Base or Comfort trim levels, and the shuttle will be in Combi trim. Base trim is as Spartan as you may expect, but move up the grades and the Proace becomes available with plenty of kit including optional keyless entry, bi-xenon headlights and autonomous emergency braking.

Does the Toyota Proace have what it takes to challenge the Vauxhall Vivaro, Transit Custom and Volkswagen Transporter? Let us know in the comments below... 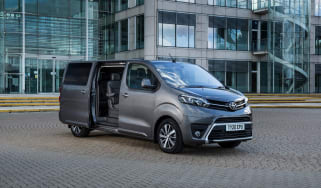