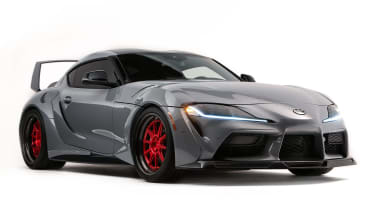 Toyota revealed a collection of five tweaked A90 Supras at this year’s Specialty Equipment Market Association (SEMA) show in Las Vegas. All five concepts feature a range of cosmetic and performance upgrades, with the most exciting model sporting a 750bhp turbocharged straight-six engine.

It’s powered by a tuned version of the standard Supra’s 3.0-litre straight-six engine, fitted with a new exhaust manifold, a titanium exhaust system, a remapped ECU, a new air filter, a larger external wastegate and an enormous Garrett turbocharger.

Like the HyperBoost Edition, the Supra Heritage Edition is powered by a tuned version of the standard car’s 3.0-litre straight-six engine. It’s fitted with a modified turbocharger, a new intake manifold, a reflashed ECU and a custom-built three-inch centre-exit exhaust system – modifications which Toyota says provides “over 500bhp.” 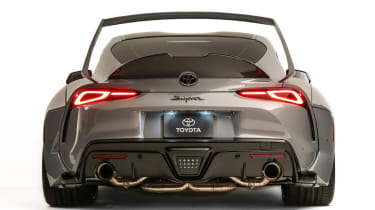 Toyota’s SEMA stand was also bolstered by three cosmetically enhanced, standard-tune A90 Supras. The GR Supra Wasabi Edition is the bewinged lime-green model pictured in our gallery. It’s fitted with a similar aero package to the Heritage Edition Supra, albeit with a more conventional rear spoiler, different 20-inch alloy wheels and a reworked exhaust system.

There’s no extra power over the standard Supra, although the Wasabi Edition has been fitted with a host of chassis modifications including adjustable Ohlins coilovers, six-piston brake calipers for the front axle, four-piston brake calipers for the rear axle and a chassis brace for the front suspension towers. Toyota says it also serves as “a gauge to measure consumer interest” which will help the company plan its future products.

The Toyota GR Supra 3000GT Concept is inspired by the Japanese brand’s limited-run factory wide-body Supra TRD3000GT from 1994. It features a set of massively flared wheel arches, a huge rear wing, an aggressive rear diffuser and a set of lightweight 19-inch alloy wheels. Inside, there’s a set of FIA-approved bucket seats and an uprated Pioneer stereo.

What do you make of Toyota’s range of one-off Supras? Let us know in the comments section below…