I don't know who was more looking forward to getting away; me or our long-term Corolla Verso. Since arriving in February, the Toyota has dealt admirably with daily 20-mile cross-city commutes, plus weekends spent ferrying children around and visiting DIY stores. 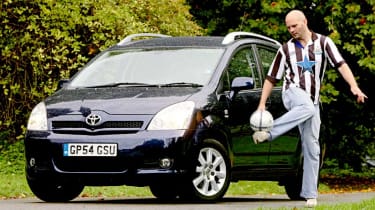 I don't know who was more looking forward to getting away; me or our long-term Corolla Verso. Since arriving in February, the Toyota has dealt admirably with daily 20-mile cross-city commutes, plus weekends spent ferrying children around and visiting DIY stores.

However, a two-week tour of the north of England would give our flexible friend something to get its teeth into. Our family holiday was to take us to Leeds, York and Newcastle (hence the football shirt), over the border into Scotland, plus seven days in beautiful Northumberland. But to get there from London involved a long motorway haul. Here the Verso proved to be a mixed bag.

Inside the Corolla, the seats are supportive and the driving position natural, while my two kids are only too happy with the in-car DVD system. So far, so good. But the engine is the weak link. The 1.8-litre unit isn't too slow or noisy, it's simply a bit of an underachiever and doesn't match up to the lofty standards set by the rest of the car. Our road testers inform me the alternative 2.0 D-4D diesel is rather uncouth, too, although at least it would have more mid-range punch than mine. Yet given the excellence of the seating layout and neat design touches elsewhere, I can't help but be slightly disappointed with the motor.

Nevertheless, the fine ride and reasonable refinement ensured the Verso made short work of the miles. I was especially impressed by the rear view mirror that dims automatically after dark, so you don't get dazzled by the headlights of the vehicles behind you. This was really helpful on a late-night return from Edinburgh.

The only downside of the trip was the discovery of a slow puncture in the rear passenger side tyre on our way home. The semi-deflated rubber was pointed out to us at a petrol station, and despite a quick top-up with air, a week later it was bulging again. We called into an ATS centre, which repaired the tyre there and then. It earned top marks from me as the friendly fitter took the time to show my five-year-old son George how the machine stripped the rubber from the wheel. A nail was discovered in the tread, and the bill was only £18.

Unfortunately, a couple of hours later I was sitting in traffic when a bus caught the wing mirror. Luckily, the housing flipped back undamaged - but the small plastic cover below had disappeared. It will take more than that to dent my high opinion of the Verso, though.

The Verso is a neat design. I really like the fact it doesn't resemble a seven-seater; it's far more appealing than the Vauxhall Zafira. But I'm not impressed by the economy. An average of just over 30mpg is well short of the 36.7mpg claimed combined figure.Dawn Tennant, picture editor