Convertible, S and R performance versions of the TVR Griffith are in the pipeline, along with an all-new model 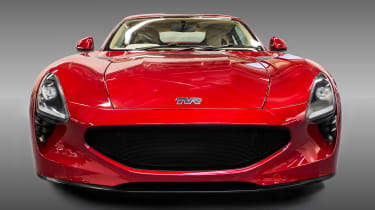 Revived British sports car brand TVR will launch a range of new models including a second all-new car over the next decade, Auto Express can reveal.

Over the next 10 years TVR will launch performance derivatives of its new Griffith, along with a convertible variant. The new models will be backed up by a racing car programme and an expanding sales and service network across Europe.

Company chairman, Les Edgar, told Auto Express that the launch of the new Griffith at this week's Goodwood Revival was not a "one-off" fantasy project, but the rebirth of the iconic sports car maker with a detailed business plan already in place.

Initially the revived company will focus on the Griffith as its main product, selling right-hand drive cars primarily for the U.K. market and also left hand drive cars for European markets, backed up by a service network.

But "once the time is right", according to Edgar, TVR will develop derivatives of the Griffith to expand the brand to more customers and build awareness.

"The groundwork for the Griffith convertible is already done," Edgar told Auto Express. "If you look at a linear type of business plan there will be faster models on the way."

The convertible will be the next model TVR launches, but is around two years away from arriving Auto Express understands; it will be followed by hotter 'S' and 'R' coupe and convertible models, and possibly a 2+2 variant.

The Griffith uses a Cosworth-developed naturally aspirated Ford Mustang 5.0-litre V8 that pumps out 500bhp. Due to the engine's flexibility and appetite for tuning, the 'S' and 'R' Griffiths could easily offer power figures of 600bhp.

As part of the 10-year plan, Edgar revealed that facelifted versions of these models would "be expected" in time and then a whole new model to join the Griffith range. Whether the new car will be smaller and Porsche Cayman-sized or a larger GT is still in discussion.

Edgar also said that as part of the expanded Griffith range the model is likely to be offered with a range of engines, possibly smaller than a 5.0 V8. TVR is also "looking closely" at the current trend of sports car makers turning to electrified powertrains, but would only offer a hybrid Griffith "when the time was right for the brand".

Are you happy to see TVR back? Let us know in the comments section below...