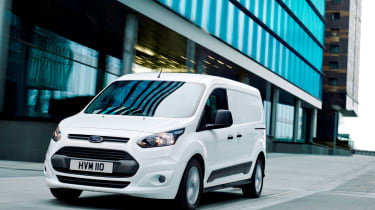 A new van road tax system could soon be introduced, after the Treasury announced it is investigating how to incentivise van drivers into buying ultra-low emission vehicles (ULEVs).

Current road tax rules see van drivers pay a flat rate of £250 every year, providing no incentive for drivers to choose cleaner vehicles – with the net result that only 0.4 per cent of vans on the road are classified as a ULEVs, emitting 75g/km or less of carbon dioxide.

• VED road tax: all you need to know

Back when the Chancellor of the Exchequer Philip Hammond delivered his Budget in November 2017, he announced a £220 million clean air fund, paid for by diesel cars moving up a band for their first-year road tax rate. However, Hammond was clear that “no white van man or woman will be hit by these measures.”

Therefore, the Government has a tricky job on its hands in encouraging van drivers into cleaner vehicles without penalising them unfairly. Announcing this new consultation, Robert Jenrick said the Treasury was aware that “buying a new van is a major investment for small businessmen and women”, and it intends to “make environmentally friendly choices more affordable.”

While details of likely changes will be ironed out during the consultation, the Government already has a model it could use to encourage drivers into less polluting vans: the previous road tax system for cars, scrapped in April 2017, was CO2 based, and saw drivers of ULEVs pay no road tax at all.

Any new road tax system for vans will apply to light goods vehicles weighing less than 3,500kg. The Treasury said it will “explore creating a graduated first year rate for vans, as is already in place for cars”, adding that “most van purchases would pay less tax in the first year as a result of the change”. However, no mention was made of whether van drivers would be better or worse off after the first-year road tax bill is paid.

Another item under consideration following a separate call for evidence from the Treasury is the use of red diesel. Intended for use by vehicles not driven on the road – like farm, construction and forestry vehicles - red diesel is taxed at 11.4p per litre, far lower than the 57.95p per litre duty levied on normal diesel.

While the use of red diesel by vehicles driven on the road is illegal, unscrupulous drivers are known to use it in this environment, with a previous study finding up to one in five drivers on the road had red diesel in their tanks.

Jenrick said “public health is at risk due to the use of red diesel in towns and cities”, and the Treasury would be looking at how it could “level the playing field on red diesel and exploring how we can encourage users to ditch it.” Red diesel used by agricultural vehicles, fishing boats, home heating and static generators will be “out of scope” for the call to evidence, however.