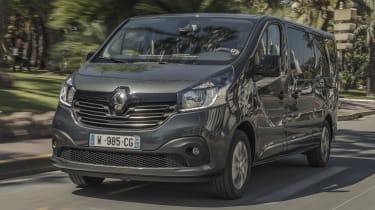 Renault has unveiled a new incarnation of its Trafic van, pitching the new SpaceClass model as a class leader for passenger space and comfort ahead of its planned on sale date of September this year. The vehicle will go head-to-head with other executive minibuses and high-end people carriers like the Volkswagen Caravelle and Toyota Proace Verso.

With room for up to nine people, the Trafic SpaceClass has a modular seating system in the second and third rows that the French marque says allows more than 50 different layouts - a level of versatility it believes is unique in this segment.

Each passenger is said to be “treated to the highest levels of comfort” and occupants also benefit from air-con, LED reading lamps, and 220V USB sockets for charging phones and other electronic devices. 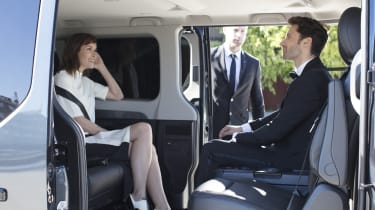 Renault is debuting the SpaceClass at the Cannes Film Festival this week, and no doubt the VIPs will be grateful of the tinted windows and leather upholstery available on some versions.

The SpaceClass has been aimed at taxi drivers, chauffeurs and companies operating city shuttle services, but it's not all about the rear seat passengers, attention has been paid to the front of the cabin as well. The steering wheel is lined with leather, while the dash features numerous storage compartments and a 7-inch screen with MediaNav navigation and R-Link with Android Auto. A reversing camera is also available on some trim levels.

As for the outside, Renault says that the SpaceClass “stands out” thanks to the headlights, chrome grille and painted bumpers, with the van featuring Comet Grey launch paint and various gloss-black details. For those looking for additional exclusivity, 17-inch diamond-effect wheels are an option as well. 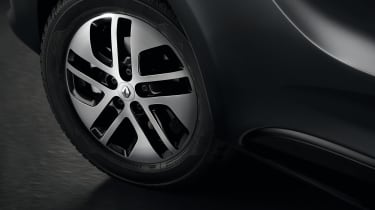 Renault is staying tight-lipped about UK pricing and specs for now, so there will no confirmation on which elements of the latest Trafic’s engine line-up - currently four versions of the same 1.6-litre diesel unit - will feature in the SpaceClass until shortly before the September launch date.

What do you make of the new Trafic SpaceClass? Let us know in the comments section below!