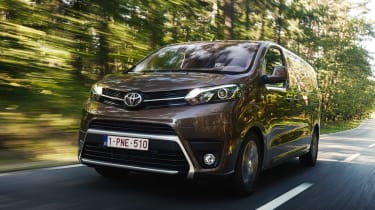 The Toyota Proace Verso Compact squeezes a huge amount of passenger or luggage space into a small package. You can’t have both but let’s not be too greedy. There are larger bodystyles in the range that give more capacity but the eight-seater Compact offers nimble handling in town and very low running costs. Impressive build quality and equipment levels add weight to the package but the price for the Family model is a little on the high side given that the Verso’s commercial vehicle origins do show in places.

Toyota is back in the large MPV segment, a market it vacated when the much-loved Toyota Previa trundled off to do the school run in the sky back in 2007. The vehicle taking the Previa’s place is the Toyota Proace Verso, a plush MPV version of Toyota’s Proace van.

Although there are more utilitarian ‘Combi’ people carrying versions of the Proace in the van range, Toyota is keen to stress that the Proace Verso slots firmly into its passenger car line-up. The vehicle comes out of Toyota’s latest platform sharing arrangement with PSA Peugeot Citroen, a deal that sees all three brands offer a version of this vehicle with the Toyota Proace Verso, Peugeot Traveller and Citroen SpaceTourer all rolling off the same French production line.

Toyota will tell you that the Proace Verso is a car, not a commercial vehicle but it still expects a good chunk of sales to be business customers and has configured the model range with this in mind. The entry level Shuttle is offered with eight or nine seats and is intended as a taxi or airport transfer vehicle. Meanwhile, the Family model is aimed at private buyers with a more flexible eight-seater system mounted on rails in the floor. Finally, for well-heeled passengers who won’t get out of bed unless it’s to sit in a rotating leather executive armchair, the six or seven-seat VIP version is due to hit the UK in January 2017.

We tested the Family spec on the smallest of the Toyota Proace Verso’s three bodystyles. Dubbed Compact, it’s only 4,606mm long, which is not a lot for a vehicle claiming to have capacity for eight adults. In fact, the Verso pulls off something of a packaging miracle by genuinely being able to offer acceptable space for eight. They’ll struggle for legroom in the last row and there’ll be no boot space to speak of left behind, but you can get them all in. If some of the passengers are smaller children then so much the better and you might even be able to slide the seating rows forward a little to reclaim some boot space. 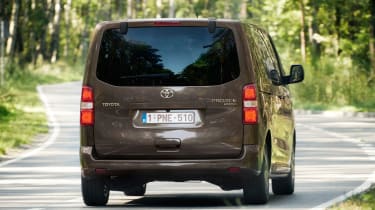 Toyota claims that there’s 282 litres of boot in a Proace Verso Family seating eight. However, stepping up to the Medium and Long versions yields 627 and 977 litres respectively – or a lot of extra legroom for passengers. Even the Compact model we tried can carry five people and a huge 1,242 litres of luggage if you lift out the cumbersome third row. 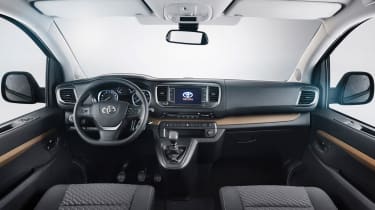 So we have a very practical vehicle in the Toyota Proace Verso but you’d expect that given its commercial vehicle origins. The question is whether it can take its place in the Toyota passenger car range without too many people smelling a van.

Once again we were pleasantly surprised. The cabin is impressively upmarket in terms of fit, finish and the quality of materials used. The switchgear and overall design will be familiar to Peugeot and Citroen owners but that’s no longer a bad thing. VIP and Family models get the neat Toyota Pro-Touch seven-inch touchscreen with satellite navigation, while Bluetooth and smartphone integration is standard on all models.

Also thrown in on the model we tested is keyless entry, trays in the seat backs, sun shades for the side windows and the Toyota Safety Sense package. That safety pack includes Autonomous Emergency Braking with pedestrian detection, adaptive cruise control and a colour head-up display to keep your eyes on the road more of the time. These features helped the Verso to a five-star Euro NACP safety rating. 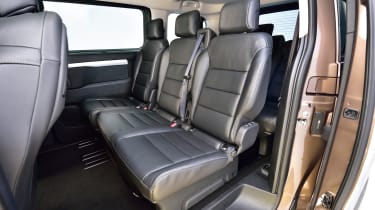 The Compact Proace Verso might feel a little stuffed when approaching its eight-person maximum capacity but it’s compact size has benefits in the shape of an 11.3m turning circle that makes it easier to pilot through town than other vehicles that can carry a similar amount. In fact, with light steering and a high, van-style driving position, it’s very at home in the city.

Performance is nothing to write home about at 11 seconds for the 0-62mph sprint but the 148bhp 2.0-litre turbo diesel in our model felt strong in-gear thanks to 300Nm of torque from 1,750rpm. Fuel economy is excellent for an eight-seater at 53.5mpg with CO2 emissions of 139g/km.

Toyota has taken steps to improve the ride comfort and refinement in the Verso versions of the Proace but it’s still slightly rough around the edges with steering that lacks feel and a six-speed gearbox that, although positive in its action, isn’t the smoothest to use. The engine sounds coarse until it builds up some heat and then it’s decently quiet when cruising but still makes itself heard when you put your foot down. Meanwhile, the ride is smooth but there’s quite a bit of noise from the suspension over rough surfaces. 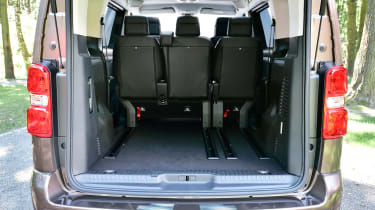 Toyota wants just under £33,000 for the version we tested and that puts it within £4k the Volkswagen Caravelle, another van-based vehicle which offers more space and a more cosseting experience for passengers. If you go for a 7-seat MPV like the SEAT Alhambra you’ll pay a lot less but get less outright carrying capacity.

Toyota is offering its five-year warranty with all Proace Versos and is only expecting to sell around 300 per year over the next two years, compared to around 3,000 Proace vans. That seems a tad pessimistic given the vehicle’s qualities but it could just be realism in the face of this challenging market.