Toyota returned to the panel van market with the Proace, a rebadged version of the Peugeot Expert 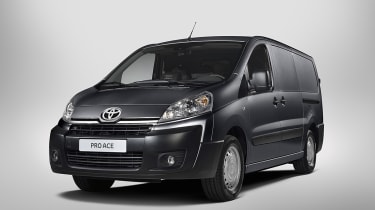 The Proace marked Toyota’s return to the panel van market in the UK, replacing the long-lived Hiace van alongside the Hilux pick-up in the firm’s light-commercial line-up.

Proace is basically a Peugeot Expert with a Toyota badge, so comes in the same L1H1 short-wheelbase van, L2H1 and L2H2 long-wheelbase vans and as an L2H1 crew van with seating for six. There's a 1.6-litre diesel engine available in the two smallest vans, with a five-speed manual gearbox, or two versions of the PSA/Ford 2.0-litre diesel engine, driving through a six-speed gearbox.

The 2.0-litre engine delivers 128bhp, or a powerful 163bhp and, thanks to that six-speed gearbox, lower fuel consumption and emissions than the smaller engine.

The Proace was replaced in 2016 by an all-new model developed with PSA Peugeot Citroen.

Base model L1H1 and L2H1 vans are powered by the PSA/Ford 1.6-litre diesel engine that develops 90bhp and 180Nm of torque, and drives the front wheels through a five-speed manual gearbox. This returns a claimed 42.2mpg and emits 177g/km of CO2.

All models can be ordered with a choice of 2.0-litre diesel engines, developing 128bhp and 320Nm of torque, or 163bhp and 340Nm of torque. Both drive through a six-speed manual gearbox and return a claimed 44.1mpg in low-roof versions and 39.8mpg for the L2H2 models. CO2 emissions are 168g/km for the low roof and 186g/km for the high roof. Unlike the Peugeot Expert, there's no option of an automatic transmission.

The 1.6HDi diesel engine requires a service at 12,000 miles or once a year, while 2.0HDi diesel models have 20,000-mile/two-year service intervals.

With two body lengths and two roof heights, the Proace offers load volumes of 5 cubic metres, 6 cubic metres and 7 cubic metres. That's obviously the same as the Peugeot Expert, Citroen Dispatch and Fiat Scudo, with which it shares its body design, and is similar to the Ford Transit Custom market leader, which offers 5.9-6.8 cubic metres in short and long-wheelbase models with a standard roof.

However, it's not as broad a spread as the Volkswagen Transporter, which has vans with 5.8 cubic metres right through to 9.3 cubic metres for the long-wheelbase high-roof model. All Proace panel vans are available with either 1,000kg-1,200kg payloads and the vans can pull braked trailers between 1,453kg-2,000kg. The crew van version of the L2H1 model offers seating for three behind the driver and a fixed full-height bulkhead to separate passengers from the load area.

The crew van offers a load compartment volume of 3.6 cubic metres and a maximum payload of 1,000kg, so customers can reclaim VAT if qualified. The big change for previous Hiace customers is the move from rear to front-wheel drive, which will make the van less suitable for towing.

All Proace vans can handle up to a 2,000kg trailer. Hiace was also a very long van, popular with carpet fitters and other trades that needed an extended carrying capacity, because of its internal load length of 2,975mm. That drops to 2,584mm in the longest Proace. A ladder frame behind the driver’s seat is standard, while full-steel bulkheads, with or without glazing, are optional (£150/£200).

All Proace models come with twin sliding side doors and eight tie-down hooks in the load compartment for additional security. Glazed rear doors or a glazed tailgate can be specified as options too (£200 for either option).

Peugeot’s ATV Grip Control electronic traction assistant is not an option on Proace, but all models come with Toyota’s electronic stability control system as part of the standard package. This is in line with the Ford Transit Custom, the VW Transporter and Mercedes Vito, and puts the Proace ahead of the Peugeot, Citroen and Fiat.

A twin-passenger front seat is standard, though a single front passenger seat is a no cost option. Proace comes with a passenger airbag as part of the standard specification.

Toyota has chosen to position itself among the safest players in this sector of the market, by fitting its vehicle stability control (VSC) system as standard on all models.

Ford, VW and Mercedes all incorporate ESC as standard on their vans, while Peugeot only includes the system on the most powerful 163bhp models.

Driver and passenger airbags are also standard on the Proace and vans come with daytime running lights, ABS brakes and fog lamps included in the standard specification. As the Proace is went on sale in 2013, it's a bit early to talk about reliability. However, the Peugeot on which it's based has been with us for some time without any major faults. Toyota offers all its LCVs with a three-year/60,000-mile warranty.

Move up from the 1.6-litre diesel engine to the lower-powered 2.0-litre diesel, and you benefit from a six-speed manual gearbox instead of five forward gears.

If you intend to put in the miles, it's money well spent, as that extra gear makes cruising much quieter and more comfortable. All three engines have the power to pull the van along with urban traffic and Toyota is happy to offer the 90bhp engine with the full 1,200kg payload, though not in a high-roof version.

Unlike Peugeot, Toyota has opted not to offer an automatic transmission with the 163bhp engine. Admittedly, it's an expensive option on the Peugeot, that few drivers will ever get the chance to try, but there is a growing demand for automatic and automated gearboxes these days.

There are very few options available. A steel bulkhead would be a popular option for added driver protection and to reduce internal noise levels. If you don’t need the carrying capacity and prefer a bit of elbow room in the front, then a single-passenger seat is a no-cost option instead of the double bench.

If, however, you do want to carry people and goods, the crew van offers seating for up to six people and a payload of more than 1 tonne, allowing VAT-registered companies to reclaim the tax.