What is your idea of class-leading fuel economy? Is it 40mpg? Or 50mpg? Well, now there's a new crop of superminis on the market with only one target - an incredible 60mpg. 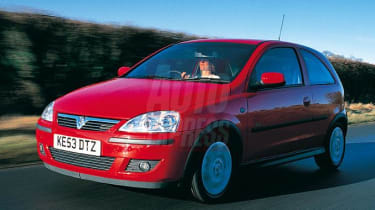 Already fighting for the UK sales top spot with Ford's Focus, the Corsa will be made even more popular by the new CDTi diesels. Punchy performance and awesome economy make the 1.3 a good all-rounder, and most buyers will be more than satisfied with the pace. The Corsa is a much better proposition with a class-leading diesel under the bonnet.

What is your idea of class-leading fuel economy? Is it 40mpg? Or 50mpg? Well, now there's a new crop of superminis on the market with only one target - an incredible 60mpg.

While such miserly fuel consumption has been achieved in the past, the cars that delivered it were often underpowered and unrefined, or simply too compromised by the pursuit of economy to be practical. It takes more than a frugal thirst to challenge for oil-burning class honours; punchy performance and decent refinement are also required. So can Vauxhall deliver with its recently facelifted Corsa?

It certainly has a chance. The big news is that a frugal new 1.3-litre diesel engine is now available, so Auto Express jumped behind the wheel to find out what it's like. Having already made an impressive debut in Fiat's revised Punto, the new four-cylinder oil-burner was developed as a joint venture between Vauxhall owner General Motors and the Italian giant. The hi-tech powerplant uses the latest in common-rail direct-injection technology to give staggering economy and surprisingly gutsy performance.

Official figures state that the 70bhp unit returns 62.8mpg and emits a mere 122g/km of CO2. The new engine also complies with stringent Euro IV emissions regulations, which means it easily falls into the 15 per cent company car tax bracket. Turn the key, and the engine bursts into life with a noisy rattle. After this initial disappointment, though, things soon improve once on the move.

At low speeds, it's hard to believe there is only a 1.3-litre motor under the bonnet, as the unit feels surprisingly powerful. Keeping up with town traffic poses no problems, and it's only when you get into higher gears that the engine reveals its diminutive output.

However, at motorway speeds, the new CDTi - which is badged Multijet in Fiat's range - is far from strained, and does not feel out of its depth even at 70mph. Vauxhall claims a 0-60mph time of 13.5 seconds and a maximum speed of 102mph. While the Corsa is no trail-blazer, peak torque of 170Nm comes at a mere 1,750rpm, and makes the car's performance easily accessible. Meanwhile, for those buyers who want a more performance-orientated diesel, the Corsa SRi is available with a 100bhp 1.7-litre CDTi unit, but economy drops to a less impressive 56.5mpg.

Unfortunately, the CDTi engine proves to be the strongest part of the package. While the model itself doesn't do anything badly, the ride and handling are uninspiring and are easily bettered by other rivals. But for many buyers, that won't matter; this Vauxhall is one of the most frugal cars money can buy, and it is practical and well built to boot.

Prices for the new 1.3 diesels start from £8,555 for the base-model Expression, and rise to £11,020 for the five-door SXi variant. Our three-door SXi test machine costs £10,370, while the flagship 1.7-litre diesel SRi is priced at £12,220. So it looks like the Luton firm is on to a winner with its new oil-burner. The unit breathes new life into Vauxhall's popular supermini, and this model has immediately become our favourite Corsa by far.