Can eco tweaks help supermini to stand out? 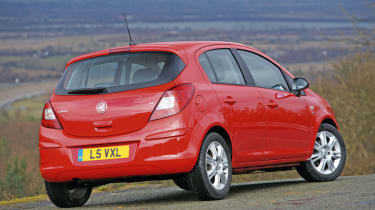 It’s not surprising Vauxhall has focused on improving emissions and fuel economy on the revised Corsa, as they’re crucial to buyers. The extra kit and chassis tweaks make it a more desirable choice, too, adding some driver appeal and extra value to the range. And they put the supermini in a much better position to tackle its legion of newer competitors. It’s a shame the company didn’t tweak the styling to mark out the changes underneath, though.

This is the revised Vauxhall Corsa, but you wouldn’t know it! The firm has left the supermini’s attractive styling well alone, and focused instead on making the car more involving to drive, as well as greener and better equipped.

Vauxhall has reworked the Corsa’s engine line-up, bringing about fuel economy savings of 13.2 per cent on average across the range. We drove the 1.4-litre petrol version, and its unit benefits from double-cam phasing to improve engine breathing – which results in a 10bhp power hike, to 99bhp.

Despite the promised increase in performance, the maker claims combined consumption is 5.1mpg better than the outgoing model’s, at 51.4mpg. CO2 emissions are also slashed to 129g/km, taking the Corsa down two tax bands.

If that carbon output is still too high, Vauxhall boasts that five of the seven engines in the new line-up emit less than 125g/km. Cleanest of all is the 1.3 CDTI turbodiesel in the new ecoFLEX model, which promises 76.3mpg economy and 98g/km of CO2.

But the Corsa needs to impress behind the wheel, too. Vauxhall claims its engineers have been busy under the skin of the new car, reworking the steering and suspension set-up. Softer front springs are mated to revised dampers, while the anti-roll bars’ diameter is increased and the steering geometry uprated.

The result of all this is that the model has improved steering feel and accuracy, plus suspension that soaks up bumps better.

Its price is more competitive, too, especially now the firm has added more equipment across the range. This 1.4-litre SE gets cruise control and an on-board computer as standard, as well as a heated leather steering wheel, heated front seats and air-con.

These changes don’t appear especially drastic, but they make a big difference to the package – and ensure the Corsa is well worth considering.