New Grandland X will make its debut in the metal at the Frankfurt Motor Show, but prices have already been revealed 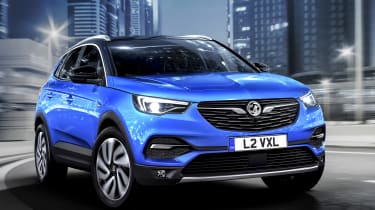 Vauxhall is aiming to grab a bigger slice of the SUV market, with a raft of new or updated crossovers on the horizon. And this is the latest: the Grandland X – the company’s rival for models such as the SEAT Ateca and Volkswagen Tiguan.

Prices and specs are now out, and the largest SUV in Vauxhall’s range kicks off at £22,310, pricing it noticeably higher than rivals like the SEAT Ateca, but placing it more or less on par with the Peugeot 3008 with which it shares its platform.

The Tech Line Nav model is aimed at fleet buyers, however. Vauxhall thinks private buyers will go for the SE model, priced from £22,485. This model gets a seven-inch infotainment screen with Apple CarPlay and Android Auto, sits on 17-inch alloy wheels and also comes with a selection of assists, including cruise control.

Two premium trim levels, building on these cars with additional style and equipment packages, round off the range. Sport Nav is priced from £24,595, with the range topping Elite Nav cars priced from £26,660.

At launch, the engine line-up is limited to just two choices – a 1.2-litre turbocharged petrol engine producing 128bhp is joined by a 1.6-litre diesel with 118bhp.

The Grandland X is set for a public debut at the Frankfurt Motor Show in September, and is the third member of Vauxhall’s ‘X’ family – joining the smaller Mokka X and Crossland X models. At 4.48m long and 1.84m wide, it’s the largest SUV we’ve seen from the brand since the Antara, and 20cm longer than the Mokka X.

It’s also the first all-new model from Vauxhall to emerge since PSA Peugeot Citroen confirmed the £1.9bn acquisition of Opel/Vauxhall from General Motors. Prior to that, the two companies had agreed to pool resources to build the next generation of SUVs, which is why the Grandland X sits on PSA’s EMP2 platform which is shared with the Peugeot 3008 and new Citroen C5 Aircross. It will be built alongside these models in France. 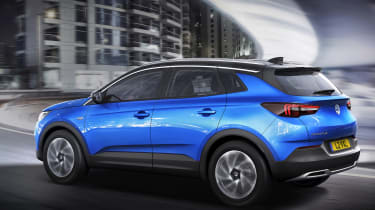 Despite sharing much with the 3008 under the skin, the Grandland X features a markedly different exterior design that takes its cues from the Astra hatch. The chunky profile and rugged black plastic body cladding are said to make the car a “robust SUV from every perspective”, while there are trademark styling additions like the double-wing adaptive LED headlights, creased bonnet and bootlid, chrome skid plates and contrast roof.

Inside, there’s even more resemblance to the Astra, with a near-identical dash and centre console layout designed around Vauxhall’s latest IntelliLink touchscreen infotainment system. As expected, it will feature Vauxhall’s OnStar emergency service and personal assistant, as well as wireless smartphone charging.

Vauxhall is claiming that the Grandland X offers an “elevated seating position typical of an SUV” for both drivers and passengers, as well as good amounts of space for five inside within the 2.68m wheelbase. The boot has a load volume of 514 litres seats-up or 1,652 litres seats down, although these figures are 77 litres and 18 litres down on the 3008 respectively.

Like the 3008, there won’t be the option of AWD at launch, but the Grandland X will feature Peugeot’s Grip Control five-mode torque distribution system. This will help to deal with slippery or rough surfaces.

The Grandland X will go on sale soon after the Frankfurt show in September, with first customer deliveries due in early 2018.

What do you think of the new Vauxhall Grandland X? Let us know below…