For mainstream makers, the executive car market seems a dead duck. Renault's Vel Satis tried to break the mould, but failed dismally. Peugeot's 607 sells in tiny numbers, Volkswagen's Phaeton isn't setting showrooms on fire, while Ford and Fiat have given up on execs altogether. 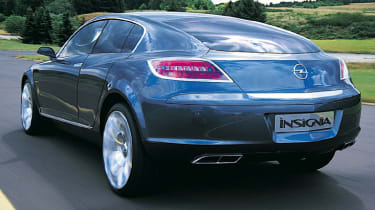 Could the Insignia give Vauxhall a decent presence in the badge-obsessed executive car market? Priced right, we reckon the proposed Omega replacement could be the answer, with its looks, versatility and the all-important rear-wheel drive chassis. A production version of the car should be in showrooms by late 2006.

For mainstream makers, the executive car market seems a dead duck. Renault's Vel Satis tried to break the mould, but failed dismally. Peugeot's 607 sells in tiny numbers, Volkswagen's Phaeton isn't setting showrooms on fire, while Ford and Fiat have given up on execs altogether. Whether we like it or not, the battle is dominated by Germany's big three, Audi, BMW and Mercedes.

But that's not going to stop Vauxhall trying to break into the big time. And this is the car it believes can deliver - the Insignia concept, which debuted at last year's Frankfurt Motor Show. Auto Express was invited to take the wheel of what will be the next Omega to see what is in store for fans of big Vaux-halls. There's no doubt that the Insignia, seen here wearing Opel badges on our test route in Germany, cuts an impressive figure. Its imposing high-tail makes it stand out in a sea of conventional saloons. But unlike the wacky five-door Vel Satis, the tailgate is disguised as a coupe-style fastback.

Design chiefs say they wanted a "personal car that the driver would be proud to be seen in". The idea is that during the week the Insignia would be used as a business tool, but at the weekend could convert to a versatile five-seater family machine that can carry the children and cope with shopping trips.

Under the dramatic bodywork, engineers knew they would need lots of power and an agile rear-wheel-drive chassis to cope with the performance. So they turned to GM's Australian arm, Holden, and borrowed running gear from the Commodore and Monaro. Inside, though, the Insignia is like nothing else. The cabin is a stylish mix of soft brown leather and exotic ebony wood inlays. All of the controls are grouped tightly around the driver, with some of the switchgear mounted on pods just millimetres from your fingertips.

To promote a sense of calm, though, only the essential switches are exposed. More complex buttons are hidden under flaps in the angled centre console.

In the back of the car, the seats are similar in layout to those in the Signum. They can be switched from three-abreast to twin chairs offering extra shoulder room or dropped down to transform the Insignia into a spacious estate.

The doors, which swing open and slide down the side of car, are impressive, although they're unlikely to make it to the production model. Slide behind the leather-trimmed steering wheel, hit the starter button and it's the 5.7-litre 344bhp V8 - also used in the new Vauxhall Monaro - which grabs the attention, though. The engine emits a deep growl that hints at serious performance: GM promises the car will cover 0-62mph in less than six seconds.

Slip the leather selector into gear and the Insignia slinks away with the poise of the best German cars. The driving position is excellent, the bolstered seats superb and the interior very light and airy.

The engine pulls exceptionally well and, even though this is a prototype, it's clear the Holden chassis is sporty and well balanced. If GM gives it the green light for production, which we've been told is more than likely, then BMW and Mercedes should start to look worried...