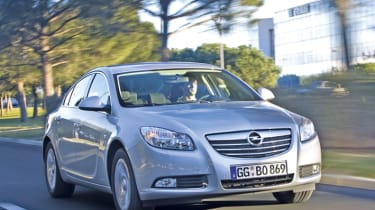 Vauxhall has done a fantastic job of upping the Insignia’s efficiency. Not only are the fuel economy and CO2 emissions better than those of its arch-rival, the Mondeo ECOnetic, but it trumps the Ford in terms of straight-line performance, too. As always with eco sub-brands, though, it begs the question: why hasn’t Vauxhall applied these changes as standard across the entire range?

Vauxhall is cleaning up its act – with an even greener version of the award-winning Insignia. The ecoFLEX variant is designed to offer all the refinement and quality of the standard car, but with reduced running costs and less of an environmental impact.

The ecoFLEX is available with only one engine, but the 158bhp 2.0 CDTI turbodiesel is the pick of the range. It rides 10mm lower than the standard model, while flat panelling on the underbody helps to reduce aerodynamic drag. Longer gear ratios and low-rolling-resistance Michelin tyres are also fitted – and the result is that economy and emissions are much better.

Combined returns of 54.7mpg represent a 10 per cent improvement over the regular car’s. Meanwhile, a CO2 output of 136g/km not only puts the ecoFLEX in the second lowest benefit-in-kind car tax band for any diesel, but also saves private owners £25 a year in road tax over the 2.0 CDTI.

Amazingly, though, Vauxhall’s quoted performance figures are no different to the regular model’s. That means 0-60mph in 8.9 seconds and a 135mph top speed – not bad given the car’s eco credentials.

As you would expect, the changes have been blended seamlessly into the Insignia package – the differences are barely noticeable. Grip in tight corners is strong, despite the slightly harder-compound rubber, and while the steering doesn’t offer the feedback of a Ford Mondeo it is direct and the model still handles well.

What’s more, the lower ride height has little effect on the Insignia’s supple suspension. The only detectable change is a slight increase in road noise – although the car is so well insulated to begin with that this is still far from intrusive.

The ecoFLEX upgrades carry a £470 premium over every trim level, but they’re not available on the SRi. This means prices range from £19,600 – nearly £2,000 more expensive than the cheapest VW Passat Bluemotion – all the way up to £24,950 for our flagship Elite. The latter has sat-nav, leather upholstery and electric seats. However, the extra outlay should soon be recouped, especially if you drive a company car.

Rival: Mondeo ECOnetic High gearing can make the Ford feel sluggish, and it’s costly compared to rivals. But factor in the superb build, space and handling, and it comes highly recommended.