If you use this model's sporty handling to the full, your suit jacket slides off the coat hook in the back... 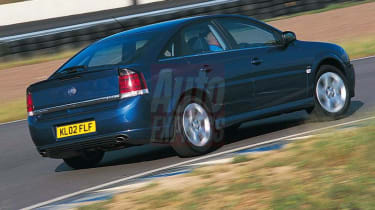 The GSi adds extra driver appeal to the Vectra range and is a civilised yet potent performer, but buyers after an all-out sporting package will have to wait for next year's Vectra SRi Turbo. Until then, the smooth and effortless V6 provides a fine mixture of performance and plushness in a restrained yet stylish package.

We've discovered one major design flaw with the new Vectra GSi. Although the Vauxhall has established itself as car of choice for the business driver, and the GSi is King Vectra, if you use this model's sporty handling to the full, your suit jacket slides off the coat hook in the back...

But while it might not have the right hook, the GSi can pack a punch... Lift the bonnet and the 3.2-litre V6 fills the engine bay, while the newcomer has a completely different suspension set-up to comfort-oriented Vectras, with front spring rates increased by 25 per cent to cope with the extra weight of the powerplant. Because the GSi has been specifically developed to appeal to British drivers, the chassis is harder and sportier in this country than anywhere else in the rest of Europe.

As well as being swift and sprinting from 0-60mph in 7.0 seconds, it's also a competent driver's car. With revised steering, harder bushes and 15mm less suspension travel than standard Vectras, the GSi has a sharp turn-in and impressive grip. The chassis feels well balanced at all times, and if you do get it out of shape, the standard-fit ESP-Plus stability package quickly sorts things out, braking up to three different wheels at once instead of applying one-wheel braking like most systems.

Although the steering still lacks the feel of rivals such as the Ford Mondeo ST220, it is precise and responds quickly to fast inputs. This is also the first time we've driven a Vectra hatchback in the UK, and we're impressed with the British-built car's huge boot space. Access to the luggage area is easy, thanks to a wide opening and low loading lip, but two large strengthening struts behind the rear seats make it awkward to stow lengthy objects.

Our test car came with the optional sequential automatic gearbox, which adds an extra £1,300 to the GSi's £20,980 asking price. The unit offers quick changes in clutchless manual mode, but lacks the sporting nature and smooth operation of the standard five-speed manual system which will appeal more to enthusiastic drivers. We also found that the gearbox was hesitant when shifting between semi and fully automatic modes, with some jerkiness in engaging drive. In spite of its performance aspirations, the Vectra GSi remains a cultured long-distance cruising machine, with minimal noise intrusion at motorway speeds and a solid, well insulated cabin.

Open the throttle and the Vauxhall emits a throaty growl from its twin exhaust pipes, but at all other times it's refined and somewhat restrained, given its punchy power output. A similar level of restraint is applied to the car's outward appearance. It sits noticeably lower on the road than a standard Vectra, and sports chromed exhaust pipes, five-spoke alloy wheels and a large mesh radiator grille. Other visual changes include xenon headlights, smoked rear lamp clusters and a small boot spoiler, but there's nothing too extrovert to hint at the performance potential. Inside, the GSi has bolstered half-leather sports seats, climate control and a CD autochanger, together with a plain-looking three-spoke steering wheel. As with all Vectras, the cabin has a quality feel, although the high doors and boot restrict visibility.

The GSi will also hit company users in the pocket, because its 243g/km CO2 emissions place it in the 30 per cent tax band. It won't be that cheap to run either, returning an average consumption of 23.6mpg on test.

Another black mark concerns reliability - this isn't the first new Vectra we have driven which has been plagued by niggling electrical problems. Overall, however, Vauxhall has created a desirable and classy addition to the line-up, despite these minor faults. It might lack the overtly sporting character of its Ford Mondeo ST220 rival, but the GSi still manages to combine luxury and subtlety with plenty of V6 power on demand. The only feature we reckon this newcomer lacks is clip-on coat hangers in the options list...