Vauxhall planned to introduce amazing self-driving technology - and we can now deliver our verdict in an exclusive first drive. 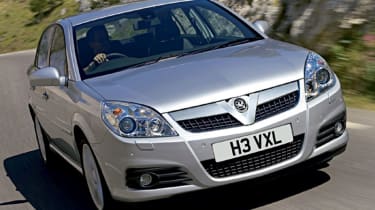 Get ready for a major shake-up in the way we drive our cars. Vauxhall is not only planning to have a "driverless" system on sale in little over five years, but owner General Motors already has a working prototype in the advanced stages of development. If our test is anything to go by, motorway travel could soon be revolutionised.

We said it was coming, and here it is! Back in issue 880, Auto Express broke the news that Vauxhall planned to introduce amazing self-driving technology on its next-generation Vectra - and we can now deliver our verdict in an exclusive first drive.

We were given the keys and told: "Keep your hands off the wheel and your feet off the pedals". We then took a deep breath and a leap of faith to find out how good the new technology is.

The Vectra driven here is the latest working prototype of General Motors' "driverless car". Officially called the Innovative Driver Assistance Programme, the package is fitted to a 3.2-litre V6 model, but it will appear in production form on the next family Vauxhall.

On the road, it's impossible to tell you're not in an ordinary Vectra in most driving conditions. However, hit a button on the dash and you can leave all the controls alone, relax and enjoy the ride.

As the lead car on the GM test track pulled away so did our Vectra, obediently maintaining a 25-metre gap while the driver ahead speeded up and slowed down around the twisting circuit, with our steering wheel moving on its own.

At first it seems like a miracle. Once you learn to trust the technology, you're free to read a book, write a letter or even take a nap. Needless to say, with the technology in its infancy the maker is reluctant to carry out too many tests on public roads - but it is closer to a production reality than you think.

The system works by using lasers in the headlights and foglamps, combined with images taken by a rear view mirror camera. Inputs from these devices 'read' the road 150 metres in front of the car.

To keep the Vectra on the straight and narrow, the camera detects the white lines on the tarmac and feeds the data into a central computer, stored in the boot. This electronic brain then in-structs a motor connected to the power-steering, which automatically adjusts the angle of the front wheels.

The lasers come into play when there is another vehicle in front of the car, again feeding data to the computer, which can then apply the throttle or brakes accordingly. Similar systems have been developed by rival makers in isolation, but GM is the first to exploit the technology to such an extreme degree.

Engineers claim the Vectra is virtually uncrashable - it even detects obstacles the driver might miss. To put this to the test, the car in front of us braked hard, and our prototype - said to be worth £1million - hurtled towards its boot. It was with some relief that we automatic-ally came to a halt with room to spare.

So what are the wider implications of this system? Will we have motorways full of snoozing drivers and cars automatically piloting themselves? It's unlikely, as GM is also working on a device to ensure that drivers don't fall asleep at the wheel. The entire set-up will go on sale after 2010. What's more, with a likely cost of around £1,500 as an option on a Vectra, it will be within the reach of a huge number of buyers.