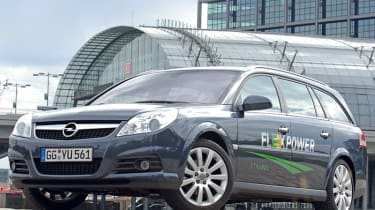 Offering an eco-friendly solution and no compromises behind the wheel - in fact, it drives even better than a petrol car - this FLEXPOWER Vectra is more great news for motorists. The only downside is the lack of ethanol filling stations, but by the time the new model arrives that shouldn't be a problem.

As well as downsizing its engines such as the Astra's 1.7-litre unit, another significant part of Vauxhall's ecoFLEX plan is the increased use of alternative fuels.

Following the lead of fellow GM brand Saab, which has rolled out its BioPower technology for the 9-3 and 9-5, Vauxhall will be launching a line-up of E85 bioethanol-powered models by the end of the decade.

Made from crops such as corn, grain, sugar beet and sugar cane, bioethanol requires a mix of only 15 per cent petrol to 85 per cent ethanol - hence the E85 tag. The first model to get the new kit will be the next Vectra. To see what buyers can expect, we tested a special E85 bioethanol prototype of the current machine.

Called FLEXPOWER, it has the same 2.0-litre turbo as the present Vectra. Thanks to bioethanol's higher octane rating (104 RON) than petrol (95 RON), better boost pressure and more advanced ignition timing can be used.

So while the regular Vectra 2.0T pumps out 173bhp and 265Nm of torque, the FLEXPOWER version has 200bhp and 300Nm. Although no offi-cial figures are available, we'd estimate a 0-60mph time of 7.9 seconds and a top speed of 140mph-plus. Indeed, the car feels very quick. Res-ponse is instant, and there's plenty of deep-chested muscle from low revs, right up to the red line. All you need to do is twist the key and go - it's just like driving a regular variant.

And it's very clean, of course. While the estimated emissions of 200g/km don't look too impressive, GM counters that driving pollution is balanced by the amount of CO2 removed from the atmosphere in growing the crops.

Right now, only a few filling stations stock E85 bioethanol, but with the recent opening of a Teesside facility which should produce 400 million litres of fuel a year, plus a duty cut of 20p per litre at the pumps, it seems bioethanol is the way forward.