A favourite of fleets and families, the Vauxhall is temptingly priced on the second-hand market. So which model is the best? 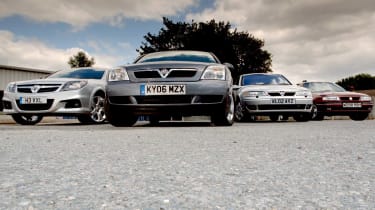 Space, economy, value and low running costs are all Vectra attributes – and they guarantee it popularity with fleet managers everywhere. However, these are also sought after virtues for used buyers, so any Vectra is a worthy second-hand proposition. But which Vauxhall rules the roost? We look at the firm’s family car line-up, starting with the last incarnation of a British motoring legend, the Cavalier.

Fighting Ford’s Sierra and Mon­deo for supremacy in the Eighties and Nineties, the Cavalier was a massive seller, yet even the most recent facelifted MkIII examples are now more than 10 years old. The Vectra succeeded it in September 1995 but, despite the new name, its conservative styling ensured this car had a familiar look. It was a big step forward technologically from its pre­de­cessor, though, with modern catalysed engines, on-board electronics and even a clock that set itself!

If you’re buying an original Vectra, go for the 1999-on facelifted version. It looks smarter and is much better to drive. The cracking 167bhp V6 delivers an executive car feel and sporty per­formance. An all-new model arrived in 2002 with a marked change in styling.

Significantly larger, this Vectra is more involving to drive and offers a massive range of engines and trim levels – buyers could take their pick from more than 125 combinations in total – so there is a model for every­one. Don’t be afraid of high-mileage ex-fleet cars, as long as there’s a full service history. But Vauxhall’s notorious electronic indicators please and frustrate in equal measure!

Today, the Vectra has an Astra-style front end which helps ensure its looks are right up to date. Pre-reg models are widely available, and car supermarkets stock lots of them – but is the latest generation the best of the breed?

VERDICT Our choice: new Vectra (2002-2005) The second-generation Vectra is a solid family car, but the sector is so cut-throat that prices are rock bottom. Add plentiful supply, and it’s stunning value. While the dynamics aren’t class leading, here is a comfortable and refined family cruiser with plenty of space, and that’s an appealing package. Pick up a decent 03-reg 2.2i five-door in Elegance trim for around £7,000.

Cavalier MkIII facelift Price range: £100-£2,000 Manufactured from: 1992-1995 The last-generation Cavalier was launched in 1988, but most examples are well past their best. Facelifted post-1992 models are good bargain bangers, particularly from 1994, when ABS and a driver’s airbag became standard. The 136bhp 2.0-litre petrol variants are strong, although the 90bhp 1.8 is widely available and reliable. There’s also a decent 1.7-litre diesel engine, sourced from Isuzu. Check that any 16-valve or V6 unit has had a cambelt change in the last 40,000 miles, as broken tensioners can cause engine failure. Gearboxes are frequently notchy, but only worry if they’re noisy. Water pumps and ECUs can fail, too, while problems with the anti-lock brakes are not unknown – look for the tell-tale yellow warning light on start-up. Rusty rear wheelarches are another common Cavalier weakness.

Vectra Price range: £300-£5,000 Manufactured from: 1995-2002 All Vauxhalls are mechanically robust, and the Vectra is no different. However, replacing the fiddly-to-fit clutch can easily exceed the value of cheaper cars, which start from only £300. A practical estate arrived in 1996, and the vast load space it offers makes this model desirable. Steer clear of early 1.7-litre diesel variants, as service intervals are every 5,000 miles. Petrol engines are reliable, but any 1.6-litre will have been worked hard, so avoid them. In any case, 1.8 and 2.0-litre models are much easier to find. In 1999, the larger unit’s dull dynamics improved when the 2.0 was fitted with the taut suspension from the V6 model. A revised 2.0 diesel develops 80bhp or, in DTi form, 98bhp. Post-2000 1.8-litre cars offer 123bhp – and, in the same year, a fantastic 147bhp 2.2 replaced the 2.0.

New Vectra Price range: £2,500-£13,000 Manufactured from: 2002-2005 An all-new Vectra arrived in March 2002. Petrol engines such as the 175bhp 2.0 turbo and 211bhp 3.2-litre V6 are strong, but the 2.0 DTi diesels are off the pace compared with rivals, and can get through lots of oil. So search for a 1.9 CDTI 120 or 150 instead – launched in January 2004, they are far superior. Variable service intervals keep costs in check, but there is a baffling array of trims. Seek out the popular SXi, SRi or Elegance on a hatchback, as it’s much more widely available than a saloon. A huge estate arrived in November 2003, and is an excellent load-lugger. Some Vectras suffer excessive rear suspension noise and the main beam system can be problematic but, in general, the second generation has proved pretty reliable.

New Vectra facelift Price range: £8,500-£22,000 Manufactured from: 2005 to date From behind the wheel, the current Vectra is the best ever, while the line-up now includes a racy 252bhp 2.8-litre VXR. Cabin trim has improved, creating a more upmarket feel inside, and there’s better equipment across the range. The seats are superb for long distances, the boot is still large and the estate vast. A new 138bhp 1.8-litre petrol engine arrived earlier this year; it’s a strong performer, and averages nearly 40mpg. Look for six-month-old ex-demonstrators and former Vauxhall employee cars, which are usually well specified with low mileages. But don’t pay over the odds for the 1.9 CDTI 120, thinking it’s a 150 – the more powerful car carries a £400-£800 premium, and is distinguished by a red ‘TI’ on the rear hatch CDTI badge.