SUVs, MPVs and crossovers are all the rage, but don't forget the benefits of the basic family car 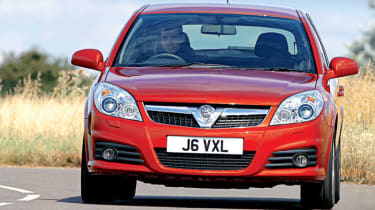 AS the entry-level engine in the Vectra range, the new 1.8-litre petrol powerplant has a lot to offer. This model is faster and more economical than its predecessor, and will save company car drivers money, too. In practice, its revvy nature can’t match the laid-back feel of its more powerful Vectra stablemates, but given the impressive price, few buyers will have cause for complaint.

Headline-grabbing SUVs, MPVs and crossover models are all the rage, but are we forgetting the benefits of basic family cars? These are the unsung heroes of the motorway which keep Britain moving... and Vauxhall has introduced a new entry-level Vectra to remind us of their value.

Holding the keys to a 1.8-litre Vectra might not sound too exciting. Yet with an all-new powerplant, the base model manages to be faster as well as more economical than its predecessor.

Already available in the Zafira, the hi-tech motor employs variable valve timing to allow the engine to burn fuel with maximum efficiency. In theory, this means you can have the best of both worlds, and get better acceleration while using less petrol.

At 138bhp, the newcomer is 18bhp more powerful than the outgoing 1.8. That gives a 9.9-second 0-60mph time – a 0.6-second improvement. Flat-out, the five-door can hit 131mph, which is 5mph more than before. Benefits at the pumps are equally minimal. Vauxhall estimates economy will be three per cent better, claiming 39.2mpg.

In reality, we reckon everyday consumption will be less thrifty. Even though engineers say the new motor delivers 90 per cent of its 175Nm torque between 2,200rpm and 6,200rpm, it’s at low revs that the unit feels weakest. As a result, you end up pushing the engine hard, which will soon cause fuel economy to deteriorate.

It’s also tricky to drive the Vectra smoothly at low speeds. The VVT system makes the motor react sluggishly at first, so you push harder on the throttle, which results in the car lurching forward. Once up to speed, the unit feels far more comfortable, while the accurate five-ratio manual gearbox makes swift progress at speed a breeze. And it’s cruising on the motorway where the Vectra is happiest. With a smooth ride and comfortable cabin, the Vauxhall eats up long journeys with ease. While the chassis is less capable on a twisty road, it still more than meets the needs of most drivers.

Priced at £14,750 in base trim and £16,945 in more desirable SRi spec, the 1.8-litre Vectra offers decent value for buyers who need more space than the Astra can offer. It also makes perfect sense for company car drivers – if you’re a 40 per cent tax payer, you will save £566 per year compared to the old 1.8. While it’s not likely to set your heart racing, the new entry-level unit proves the good old-fashioned family car still has a place on the UK’s roads.