There was a time when being issued with a Vauxhall Vectra diesel as your company car meant it was time to either brush up your sales technique - or start looking for another job. 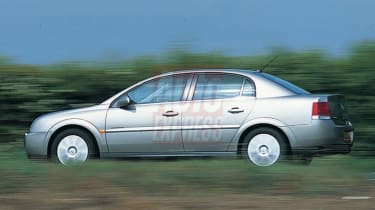 This new diesel is remarkable. Vauxhall finally has a credible oil-burning contender, especially as its low CO2 emissions will make it a hit with fleet buyers. Not even Ford's Euro IV-compliant engines can match the Vectra's super low output - and that's tremendous news for Luton's projected fleet sales targets.

There was a time when being issued with a Vauxhall Vectra diesel as your company car meant it was time to either brush up your sales technique - or start looking for another job. If it was a white estate in Envoy trim, then the imminent P45 was a dead cert. But sales reps across the country are bound to rejoice when they hear that Luton's rattly old oil-burners are soon to be a thing of the past.

The all-new 1.9-litre CDTI goes on sale here next month, and its arrival doesn't come a moment too soon for the firm. Its old diesel engines have been the weak link in an otherwise fairly desirable Vectra line-up since the current model went on sale in 2002.

And with a little help from Fiat, Vauxhall is confident that the new powerplants are up there with the class lead-ers, such as Ford's 2.0 TDCi and Renault's 1.9 and 2.2-litre dCi units.

The Italian company has helped develop the engines, which debuted in the Alfa Romeo GT coup� and will also go into the Alfa 156 and Fiat Stilo. The units use the latest common-rail technology to deliver power and refinement, while particulate filters in the exhaust system help ensure they are compliant with the tough Euro IV emissions regulations. This means they fall into the cash-saving 16 per cent company car tax bracket - and are exempt from the three per cent levy for older diesels.

Clean With a CO2 figure of 154g/km, the Vectra CDTI is one of the cleanest oil-burners money can buy. As a result, Vauxhall could have a major success on its hands. As we already know, the model enjoys supreme comfort and ride quality; both of which are key factors in the competitive family sector.

The upmarket cabin, huge boot and simple controls are further bonuses in a class where cars are often allocated rather than chosen - and the big Vauxhall certainly doesn't leave you feeling hard done by. That said, exactly why the firm still insists on using the pointless automatic indicator stalks - even after some of its most loyal customers have complained - is beyond us.

Fire up the engine, though, and the improvement is immediately noticeable. Although noisy when cold, the Vectra's new oil-burner is much quieter than the engine it replaces. Once on the move, things get even better. The powerplant is responsive from low down in the rev range, with 315Nm of torque available from only 2,000rpm.

Performance feels even better than the figures suggest - the car seems livelier than the 2.2-litre petrol model, both from a standstill and on the move. It's smooth at speed, too, with refinement to rival petrol cars when cruising on the motorway. The engine is mated to an all-new six-speed manual gearbox, which is a vast improvement over the outgoing car's notchy five-speeder. The lever has a short throw, and feels far more positive than the box in Vectras of old, while the ratios are well spaced, and take advantage of the torque for flexible in-gear acceleration.

In all other respects, the new diesel maintains the virtues of the current Vectra. The steering is a touch light and lacks feel, but grip is excellent and the anti-lock brakes are progressive and give good feedback. So finally, Vauxhall has a diesel model that's nothing to be ashamed of - from the point of view of both the company that makes it and the people who will drive it.

No longer does an oil-burning Vectra mean you are no good at your job. While Vauxhall's old oil-burner has been laid off, it looks as though the new one could soon be due for promotion...