Petrol fans are in for a shock, because the world of performance cars is evolving. In secret workshops across Europe, the planet's biggest motor manufacturers are putting the finishing touches to a new breed of diesel-powered supercars. 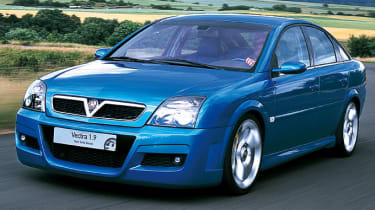 Is diesel the performance fuel of the future? The Vectra TT is clean, frugal and very quick. With VXR input on the chassis, it would make a great fast road car for British drivers. We think Vauxhall should go ahead and launch the car with this engine - but don't expect to see it until late 2005.

Petrol fans are in for a shock, because the world of performance cars is evolving. In secret workshops across Europe, the planet's biggest motor manufacturers are putting the finishing touches to a new breed of diesel-powered supercars.

What's more, the early results are so promising, company bosses are confident that traditionalists can be brought round to embracing oil-burning in the pursuit of driving pleasure. Petrol is fast becoming yesterday's news!

This high-performance Vauxhall Vectra Twin Turbo concept, or TT for short, is the first hard evidence of this mysterious development - and Auto Express was first and exclusively behind the wheel to find out what it was like. On paper, the 1.9 Twin Turbo Diesel is very impressive. Delivering 212bhp (112bhp per litre) and a staggering 400Nm of torque, Vauxhall claims that this is the most powerful 1.9-litre diesel ever built.

Maximum output is produced from a lowly 1,400rpm, thanks to the engine's twin-turbo design. Yet despite this, the car will still return 47mpg, and meets stringent Euro IV emissions legislation. The key to this amazing combination of thrust and frugality is the use of sequential turbocharging.

Employing two different size turbochargers also eliminates turbo lag, making the power delivery smoother. The smaller turbo is in use up to 1,800rpm, then both blowers are on line between 1,800 and 3,000rpm, with the larger unit on its own above 3,000rpm. Auto Express put the Vectra TT through its paces at Vauxhall sister firm Opel's secret proving ground in Germany. The car certainly looks the part - although the lurid blue interior wasn't exactly to our taste, the chunky bodykit and stylish 19-inch alloys certainly were.

There's the familiar diesel clatter at idle, but this engine doesn't feel anything like a conventional oil-burning unit. Floor the accelerator from low revs and the power flows very evenly. In fact, the stream of power is so constant - and the familiar turbo kick so obviously absent - that the Vectra's performance feels deceptively mild.

It's hard to gauge real-world pace without other cars to measure your progress against, but Vauxhall says the Vectra can hit 62mph from rest in only 6.5 seconds. Engineers say the powerplant will be happy at high revs, too. A favourite trick of the development team during autobahn testing was to cruise along at 70mph, then floor the throttle.

They claim that Porsche Boxsters and powerful Mercedes S-Class models couldn't keep up with the Vectra TT's searing pace. Unfortunately, this prototype lacked the final VXR sports suspension package. With only firmer springs and dampers fitted, it wasn't possible to give a definitive verdict on the car's handling potential.

However, the front-drive chassis handled the high torque levels well, and only under hard acceleration did the nose get a little light. But the big question is: will we get the car? A spokesman for Vauxhall's high-performance VXR brand told us: "We're discussing the project at the moment. We could go ahead with this 400Nm engine, or wait for a redesigned gearbox, which could then make use of the motor's full 450Nm potential." Either way, it looks as though UK diesel fans are in for a real treat.