It's the fastest Vectra ever! With a 161mph top speed, the only other four-door Vauxhall to have gone quicker than the new Vectra VXR is the legendary Lotus Carlton. 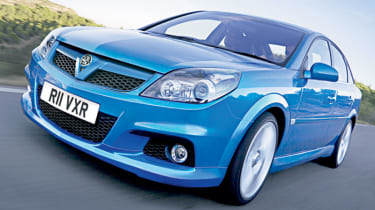 Offering lots of usable power from its turbo V6, the Vectra VXR is a very fast car. It also has lots of grip - provided you're careful with the throttle - and corners quickly and safely thanks to clever electronic dampers and tuned suspension. On the downside, its ride is firm, it's not as involving as rivals and has a high price. Nevertheless, few cars are this practical and fast for less than £30,000.

It's the fastest Vectra ever! With a 161mph top speed, the only other four-door Vauxhall to have gone quicker than the new Vectra VXR is the legendary Lotus Carlton. But back in 1990, you would have paid a cool £48,000 for the Lotus-tuned car. Happily, the newcomer costs rather less.

The £23,995 price puts the Vectra VXR into direct competition with the Ford Mondeo ST, Mazda 6 MPS and even Audi's A4 2.0T FSI quattro. Is outright performance going to be enough to lift it to the top of the class?

Joining high-powered VXR versions of the Monaro and Astra, the Vectra is the latest attempt to add some excitement to the Vauxhall brand. Available in hatchback form now - with estate models arriving in the spring priced at £24,995 - it's certainly much spicier than the regular Vectra. The newcomer adds a deep chin spoiler, with honeycomb mesh air intakes, plus low side skirts and 18-inch alloy wheels to the revised Vectra's lines. It may not be pretty, but it's aggressive!

Inside, comfortable Recaro sports seats and a three-spoke leather steering wheel enhance an already excellent cabin. But the real fireworks are under the bonnet, where General Motors' new 251bhp 2.8-litre V6 turbo engine takes pride of place. It offers variable valve timing and is mated to a close-ratio six-speed gearbox.

With peak torque of 355Nm, the car posts some very impressive figures. The sprint from 0-60mph is dispatched in 6.5 seconds, with 50-70mph taking only 7.6 seconds. But what stands out most is the engine's power delivery. On the move, it's both brawny and refined, pulling hard from low revs and providing strong thrust up to the red line, all with just enough of a smooth V6 howl. The VXR feels very fast, too - quicker than Audi's 200bhp 2.0T A4 and nearly on a par with the V8-engined S4.

Engineers have gone to town on the chassis. Along with bigger brakes, the Vectra VXR gets specially tuned electronically controlled dampers, revised steering and a whole host of devices to boost traction and reduce understeer. As with Astra VXRs fitted with IDS+, there's also a dashboard-mounted Sport button, which stiffens the suspension further.

In normal mode, refinement is good, although the V6 engine's huge power output means the car torque steers under full throttle. This displayed itself on the changeable roads of our test route. Drive more carefully, however, and it's possible to tackle corners at speed. There's lots of grip, minimal body roll and a ride that's firmer than on regular Vectras.

Yet if you're not careful with the throttle at low speed, the front wheels can spin and the steering fights in your hands. And although the Sport button sharpens the responses, it does little to improve grip levels, and also makes the ride jarring. The whole experience isn't very involving, either - and both the Mondeo ST220 and A4 2.0T FSI are more fun and composed.

The VXR is also likely to suffer from the same hefty depreciation as the Ford; £24,000 mainstream cars simply can't match the residual strength of, say, an Audi. Still, the VXR's huge performance isn't in doubt. And while it's unlikely to tempt prestige buyers, this pace alone will be enough for many people.