Mad Vauxhall VXR8 GTS-R is firm's most powerful car ever

Vauxhall's most powerful car ever is here, but the VXR8 GTS-R will be limited to just 15 examples in the UK with a hefty price tag 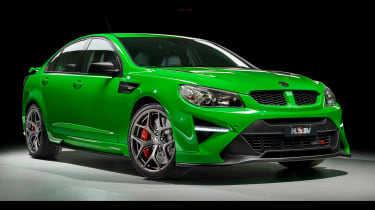 Vauxhall will reveal its most powerful car ever at this year’s Goodwood Festival of Speed in the form of the VXR8 GTS-R – billed as a final hurrah for the soon to be dead VXR8 range, of which production will end when General Motors closes its Holden plant in Adelaide, Australia this October.

Under the bonnet sits a remapped version of the 6.2-litre supercharged V8 featured in the current GTS model, which is also fitted with a new air filter system.

The tweaks turn the wick up by 11bhp, meaning that this ‘R’ version boasts 587bhp, making it the most powerful car to wear a Vauxhall badge in the firm’s 114-year history. The torque figure of 740Nm, however, remains unchanged. 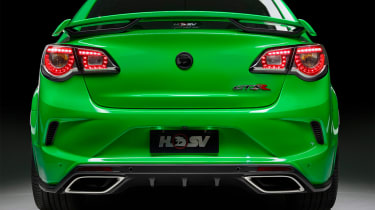 Vauxhall hasn’t released any performance figures in tandem with the announcement – we’ll have to wait a little while longer for those – but the GTS-R should advance on the 4.2 second 0-62mph time of the regular VXR8 GTS thanks to additional grunt. The regular car is restrained at the top end by an electronic 155mph muzzle, and it’s unclear if Vauxhall will let the GTS-R completely off the leash.

Drive is sent to the rear wheels via a limited slip differential and a six-speed automatic gearbox. Elsewhere, this car gains new brakes with six-piston calipers and 410mm front discs, while the torque vectoring system featured on the GTS remains. 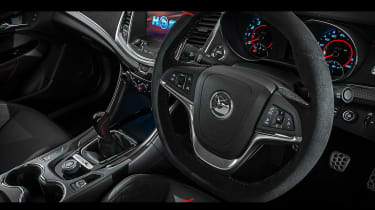 Visually, the VXR8 GTS-R gets an aggressive face with a large front splitter and smatterings of carbon-fibre. Around the back there’s a new part-carbon rear diffuser, and exhausts with diamond shaped tips flank it. Additionally, the new brakes are housed behind new 20-inch diamond cut forged alloy wheels, while the cabin wears a mix of leather and Alcantara.

Just 15 VXR8 GTS-Rs will be available in the UK, all of them saloons. Prices will start at £74,500, placing it not too far behind the starting price of the new Mercedes-AMG E 63 saloon.

What do you make of the VXR8 GTS-R? Let us know in the comments!