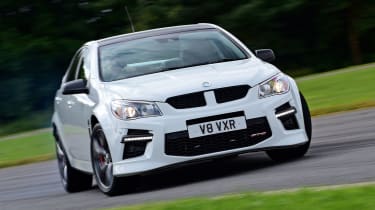 The VXR8’s automatic transmission isn’t the last word in hi-tech engineering, but it’s smooth enough and works well when used in combination with the paddleshifters. However, in a car that’s geared towards driver thrills, we’d be inclined to opt for the manual version and pocket the £1,725 difference in price. The saving would certainly come in handy for the fuel bills.

In an effort to further broaden the thunderous VXR8’s appeal, Vauxhall has added the option of a paddleshift automatic transmission. The six-speed unit bucks the current trend for sophisticated twin-clutch systems in favour of a traditional torque convertor unit. 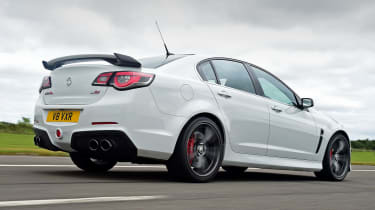 Yet while this approach isn’t exactly cutting-edge, it doesn’t affect the way the VXR8 performs – Vauxhall claims the newcomer will blast from 0-62mph in just 4.2 seconds, which is exactly the same figure as the manual version.

However, on the move, the paddleshift version feels a little lazier in its responses than the standard car. The transmission slurs automatic changes smoothly enough and it responds crisply to the steering paddles, but the torque convertor’s slipping effect takes the edge off the V8’s strong low-speed response. 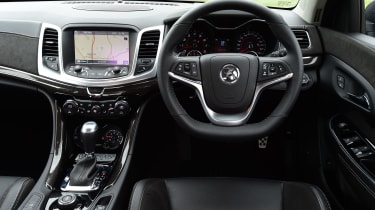 On the plus side, in manual mode the gearbox allows you to hold on to gears all the way to the engine’s red line, and above 3,000rpm the Vauxhall accelerates with the same ferocity as the manual model.

Elsewhere, the infectious character is unchanged – and that includes the thumping, supercharged V8. Boasting 576bhp and 740Nm, plus a bellowing soundtrack, the Chevrolet Camaro-sourced engine is bursting with muscle car charm. Yet the VXR8 marries genuine chassis sophistication to the engine’s old-school approach. 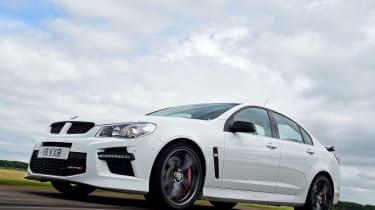 Standard magnetic ride adaptive dampers deliver strong body control, while the steering is naturally weighted and progressive, letting you place the big Vauxhall with confidence. And with its traditional rear-drive layout and thumping torque output, it’s easy to tailor the VX’s line through a corner using the throttle.

Select the car’s ‘Tour’ mode, however, and the suspension softens, resulting in a supple ride. Refinement is good, too. But the car’s existing weaknesses remain. The cabin is vast, yet feels cheap and looks garish compared to premium rivals. The same is true of the exterior, with its ‘look at me’ spoilers, scoops and air vents. Then there are the rather scary running costs. And it may be a cut-price M5 and E 63 rival, but it still looks expensive at £56,000.