Aussie-sourced saloon gets fresh look and new tech, but can it justify a £50k price? 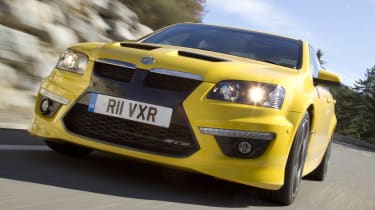 We’re pleased to report the new VXR8 delivers the genuine loud-and-proud VXR8 experience, with more polish than ever before. While the updated interior is improved, it’s still some way short of its direct rivals, but thankfully it makes up for it with bags of character, adequate comfort and a fantastic sound from the exhausts. The main sticking point for the newcomer is price. A strong Australian dollar has driven it up to almost £50,000 for this top-spec GTS model – which is dangerously close to more accomplished German rivals – the reason why Vauxhall only expects to sell 25 examples a year in the UK.

When it comes to fast saloon cars, Vauxhall has some serious experience! It all began back in 1911 with the Prince Henry – acknowledged as Britain’s first four-seater sports car –  continued with the supercar-slaying Lotus Carlton and more recently with a host of cheap but powerful Monaros.

Fast-forward to the present and a brand new VXR8 has arrived. Essentially a rebadged version of the Australian Holden E3 GTS, it continues the Carlton’s no-nonsense approach of using a huge engine, now a 425bhp 6.2-litre V8, to power the rear wheels. But with a price tag now nudging the £50,000 mark, is it still the people’s muscle car it once was?

A new ‘Shockwave’ grille dominates the front end, while LED lights, vents in the flanks and reshaped exhausts complete the look. Vauxhall revealed that only nine cars have been sold in the UK so far, but each of them has been ordered in a brash and bright paint colour, much like the banana yellow of our test car.

On the inside quality has taken a big leap – there’s leather trim as standard, a new instrument cluster and centre stack, and a cleaner look all round. The materials are still no match for anything from Germany though. Gadget fans will love the EDI system, which relays real-time data to the central screen – including G-forces, current power and torque output and even drift angle.

Compared to rivals like the Mercedes C63 AMG and BMW M3, the VXR8 isn’t the sharpest tool in the box, but it has other characteristics that make it huge amounts of fun. The steering is relatively precise, the booming V8 sounds great and still delivers a shocking turn of pace, and new magnetic dampers make it comfortable and controlled all at the same time. We’d steer clear of the six-speed auto though, it’s slow to react in auto mode and there’s no paddles, only a push-pull stick shift, when you want to change gear yourself. We’d stick with the much-improved six-speed manual.

More than anything though, the VXR8 loves to be driven hard. Switch the traction control off fully, bypassing the interim ‘competitive’ mode, and it likes nothing more than to spin up it rear tyres and encourage you to apply some opposite lock and leave a cloud of smoke behind you. It’s not subtle, but it’s huge amounts of fun.