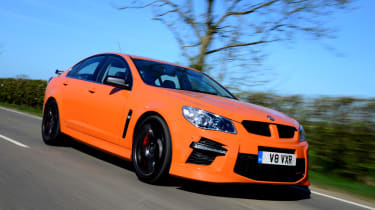 The Vauxhall VXR8 has always been a bit part player in the supersaloon class. Essentially a rebranded Holden from Australia, it’s a no-nonsense performance car that in the past has traded on its muscle-car image and value-for-money price tag.

However, the latest version aims to add a layer of sophistication to the model’s simple and straightforward character, courtesy of some hi-tech driver aids, such as adaptive damping. Yet the newcomer hasn’t forgotten its roots – it looks as aggressive as ever and is priced below its German rivals.

This loud, brash rear-wheel-drive monster really will not suit anyone of a nervous disposition – particularly as the supercharged V8 engine pumps out a heady 576bhp But all that fun comes at a price when you go to fuel, tax or insure it.

If the GTS isn't brash or practical enough for you, it's also offered as the VXR8 Maloo pick-up or a Tourer estate version, plus there’s an entry-level Clubsport saloon. All three are powered by the same naturally aspirated 421bhp 6.2-litre V8 are available to special order only.

The VXR8 has always oozed old-school muscle-car charm – and the latest model continues that tradition. Under its bright orange bonnet is a 576bhp supercharged 6.2-litre V8 engine sending power to the rear wheels through a conventional six-speed manual gearbox. 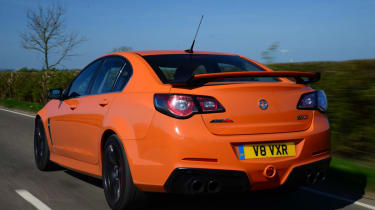 Performance is explosive: it goes from 0-62mph in 4.2 seconds – exactly the same time as the Mercedes E63 AMG. And while it can’t quite match the AMG’s elastic in-gear response, in real-world driving, there’s very little to separate our muscular duo.

The addition of a supercharger means the VXR8 accelerates violently from as little as 1,500rpm, while valves in the exhaust open above 4,000rpm to deliver a thunderous, NASCAR-style soundtrack. Happily, the powerful brakes are equally effective.

Equally impressive is the performance in corners, where the adaptive dampers and torque vectoring ensure superb handling. There’s plenty of grip, strong body control and, with 576bhp available, the car’s attitude can be adjusted easily with steering and throttle inputs.

It’s not perfect, though: while the steering is reassuringly weighty at low speed, it gets lighter the faster you go. It also lacks precision, resulting in lazier turn-in and more understeer than its Mercedes rival. But it’s the VXR8’s lack of everyday usability that’s most frustrating.

Away from the fun of twisty back roads, you’ll soon tire of the over-sized steering wheel, grabby brakes and heavyweight gearshift and clutch. Drivers looking to reduce the load on their left leg can specify the optional six-speed automatic gearbox. Unlike rival systems from BMW and Mercedes, this is a traditional torque convertor transmission rather than a twin-clutch unit. The changes are smooth and crisp enough, particularly when using the steering wheel-mounted paddles, but the set-up blunts low speed response. Despite this, Vauxhall claim identical performance figures for automatic and manual models, while the car’s voracious thirst for fuel remains unchanged.

This is where the case for the Vauxhall VXR8 begins to unravel. Hefty CO2 emissions of 363g/km place it in the highest private and company car tax brackets, and fuel economy for the manual and automatic versions is a 18.5 and 18.0mpg respectively – driver with a heavy right foot and these figures will quickly drop into single figures. Insurance will be sky-high, too.

Crucially, Vauxhall has changed the one aspect of the VXR8 that made financial sense – its list price. The first-generation model cost less than £30,000 – a relative bargain for such a fast and powerful car – but this updated version sees the price climb to well over £50,000 depending on the model you choose.

On the plus side, our experts predict decent 46.3 per cent residual values – better than what Mercedes E63 AMG owners can expect.

You'll have to get used to being the centre of attention if you drive a VXR8, because its combination of wild looks, relative rarity and rumbling soundtrack never fails to turn heads. The optional Fantale Orange paint adds to the arresting visuals, but even more sober colours can’t disguise the garish tailgate spoiler, bodykit and gaping front grille.

Yet while the big Vauxhall always manages to cause a stir, you’d struggle to call it pretty. For starters, the bodykit has an aftermarket look and feel, while the Holden Commodore on which the VXR8 is based looks dated and ungainly by current European standards.

Things don’t improve much inside, where the car trails the Mercedes E63 AMG for style and quality, while some of the switchgear is awkwardly placed. Even so, the cabin of the GTS is much better than the old car’s, as it features a more modern dashboard design and higher-grade materials. Also included is a touchscreen infotainment system with a comprehensive Enhanced Driver Interface (EDI) function.

This neat addition allows you to view all of the car’s performance parameters, from cornering g-force to real-time monitoring of the adaptive dampers. There’s also a lap timer, a data logging facility and the option to display the engine oil temperature and pressure dials. It’s gimmicky, but it does help to distract you from some of the Vauxhall’s ergonomic flaws, such as the slightly high-set driving position, large steering wheel and the indicator stalk located on the right of the steering column rather than the left.

This is a pretty big car, so it’s no real surprise to find that there’s plenty of room inside. For starters, the wide rear bench will accommodate three adults – although the transmission tunnel means those sitting in the middle have nowhere for their feet. 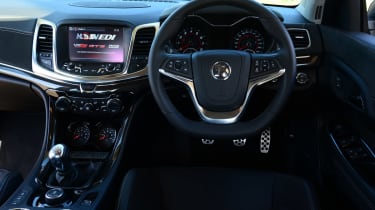 The only disappointment is the 496-litre boot, which is a little smaller than some of its rival cars. And while the VXR8’s high-set driving position makes for a pretty decent view of the road ahead, the large spoiler and small mirrors hamper your rearward vision.

Vauxhall only plans to sell 100 VXR8s a year, but there’s no reason to suspect the car won’t be reliable. The tried-and-tested LSA 6.2-litre V8 is used in many US muscle cars, plus the VXR8 is essentially hand-built by Holden’s special HSV division.

You’re unlikely to lose sleep over safety, either, because the Vauxhall comes loaded with life-saving kit. Along with the expected airbags and stability control are confidence-inspiring additions such as forward collision alert, blind-spot monitoring, lane-departure warning and a windscreen head-up display. 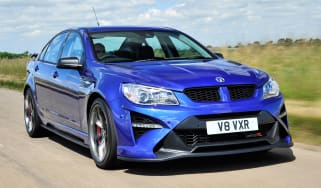 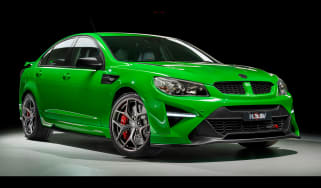 Mad Vauxhall VXR8 GTS-R is firm's most powerful car ever

Vauxhall's most powerful car ever is here, but the VXR8 GTS-R will be limited to just 15 examples in the UK with a hefty price tag
Vauxhall VXR8 - best performance cars 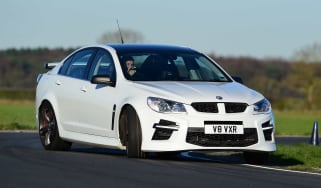 If you want serious performance on a budget in the large saloon car class, you’re probably out of luck.
Advertisement
Lexus GS F vs Vauxhall VXR8 GTS 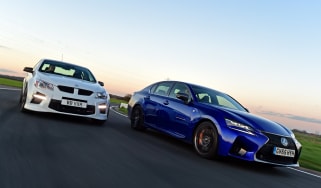 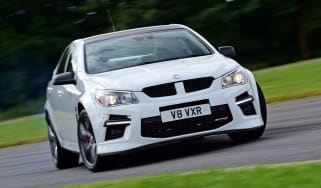 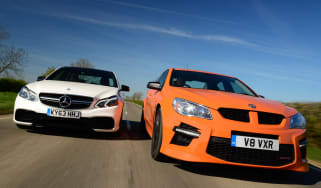 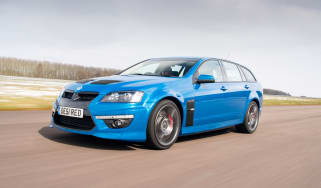 The muscular Vauxhall VXR8 Tourer has huge pace and an enormous boot. But is it worth £50,000?
Vauxhall says no to Chevrolet SS 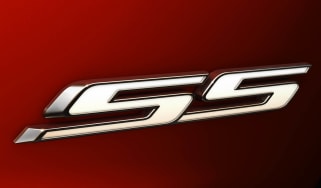 Vauxhall says no to Chevrolet SS 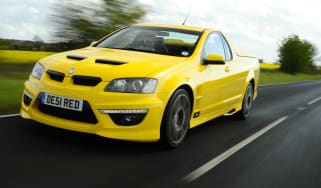 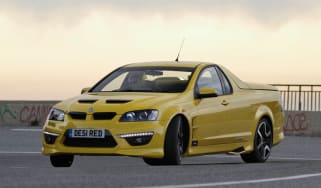 The V8 pick-up truck is unlike anything else in the UK, but is it actually any good?
Vauxhall VXR8 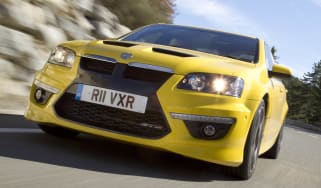 Aussie-sourced saloon gets fresh look and new tech, but can it justify a £50k price?
Advertisement
Vauxhall VXR8 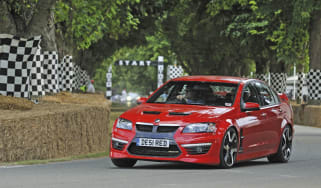 The 2011 version of Vauxhall's tail-happy sports saloon was on display at Goodwood, and we drove it up the hill to find out what's new.
Vauxhall VXR8 Bathurst S 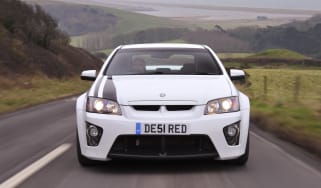 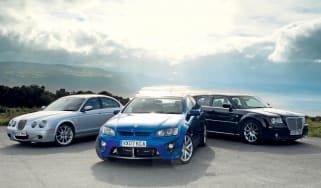 Can Vauxhall's Australian-Bred muscle car see off rumbling V8 rivals from Chrysler and Jaguar?
Skip to HeaderSkip to Content