V8 fans will need to act fast, with just 15 examples of the Vauxhall VXR8 GTS-R coming to the UK 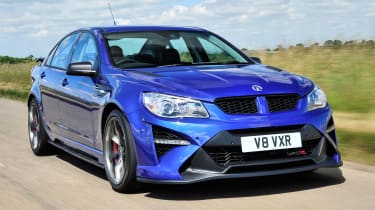 Expensive and overstyled, the VXR8 GTS-R will always be an acquired taste, but if thundering V8 saloons are your thing then they don’t come much more intriguing than Vauxhall’s latest supercharged monster. And while the price is high, its last-man-standing status and limited production run should make it quite collectable too.

Some say, you don’t know what you’ve got until it’s gone. If that’s true, then many of us will feel a pang of regret when the 15 UK-bound Vauxhall VXR8 GTS-Rs have all found homes. They’ll be the last interpretations of Holden’s venerable Commodore, with General Motors shutting down the Australian factory this month.

The VXR8 has long been a loveable anachronism, and this latest version, with its Chevrolet-sourced 6.2-litre LSA V8 and six-speed manual transmission, is the most anachronistic of the lot. The supercharged block, also found in the US-market Cadillac CTS-V and Chevrolet Camaro ZL1, develops 586bhp in this form. That puts it well into Mercedes-AMG E63 and BMW M5 territory, while a torque output of 740Nm is nothing to be sniffed at, either.

You also get a large and practical four-door body, with ample rear cabin space and an enormous boot. Power is delivered to the rear wheels alone, with only some Continental rubber and the combined efforts of traction and stability control systems to keep you pointing in the right direction. Magnetic Ride Control dampers can be adjusted between Touring, Sport, Performance and Track modes and, controlled via the Driver Preference Dial on the centre console, you can also tweak the behaviour of the stability control, traction control, power steering and exhaust valves. 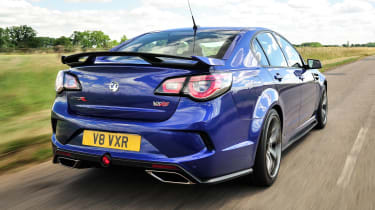 Most notable over the standard GTS, are the changes to the steering and the exhaust note, and both are at their best in Performance and Track modes. In Touring and Sport the steering can feel a little too light for a car as large and muscular as the VXR8, which chips away at your confidence, while the fruitier exhaust note gives the GTS-R a soundtrack more intense than any of its rivals.

Making the most of this aural accompaniment does mean pressing the throttle pedal for longer periods than you might wish to entertain on public roads, as the GTS-R also thunders up to high speeds very quickly indeed. It’s a real rush, and the change in tone as the needle passes 4,000rpm – a distinct click, followed by a NASCAR-style blare and an increasing rush through the adjacent scenery – is utterly addictive. 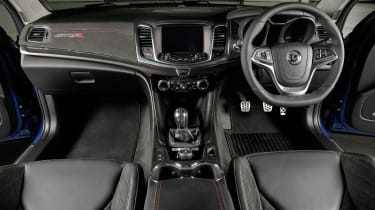 Thankfully, the brakes are mighty, and the chassis is more than capable of handling all this power, even if your license isn’t. The GTS-R gets 20-inch wheels as standard, which are nine inches wide at the front axle and 10 inches wide at the rear, with 255/35 R20 tyres up front and 275/35 R20 astern. The magnetic suspension keeps those tyres on the road too, feeling surprisingly pliant even on broken surfaces, which has the welcome side-effect of making the VXR8 a relaxed long-distance tourer too.

We’d like a little more steering feel, but on dry roads you’re unlikely to run out of grip unless you’ve overcooked it. And with all that torque, there’s always the potential for oversteer, of course, but most of the time the huge traction will help fire you out of corners and up the next straight before you’ve had time to blink.

It’s very expensive and the cabin is a bit naff, true, while there’s huge tyre noise and the exterior styling is a bit try-hard, but Australia’s final brutish saloon has a big heart and even greater appeal.