New Vauxhall VXR8 GTS promises to match the Mercedes E63 AMG for much less money. Does it deliver? 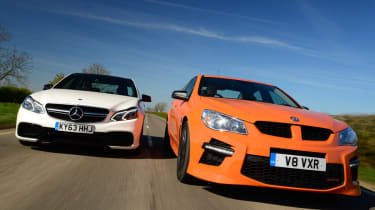 For the past few decades the supersaloon market has been dominated by premium German brands, but that could all change with the arrival of the new Vauxhall VXR8.

There’s only one version, the GTS, which benefits from a lengthy list of go-faster kit, including launch control, adaptive damping and an on-board computer that can log everything from lap times to cornering g-forces. However, the most eye-catching feature of the VXR8 is its £54,499 price tag.

While that’s a hefty amount of cash to shell out for a Vauxhall, it’s around £30,000 less than the Mercedes E63 AMG S, which is the only four-door model on sale that really comes close in terms of power and performance.

Like the VXR8, the AMG features a mighty 577bhp V8 and a traditional rear-wheel-drive chassis that promises plenty of old-school driving thrills. The Mercedes blends this pace and agility with one of the classiest cabins in the business, plus an unrivalled upmarket image. So will this be enough for it to justify its huge price premium, or will it be toppled by a knock-out blow from the bargain-priced Vauxhall?

Click the links above to read each review and then read on for the road test verdict.

Both cars boast thundering V8s and a heady 577bhp power output, but that’s where the similarities end. The Vauxhall’s larger 6.2-litre engine comes from the legendary Chevrolet Corvette and is boosted by an Eaton supercharger. Mercedes has developed the E63’s V8 with an eye on efficiency, meaning the twin-turbo displaces a smaller 5.5 litres and features modern fuel-saving technology such as a stop-start system. 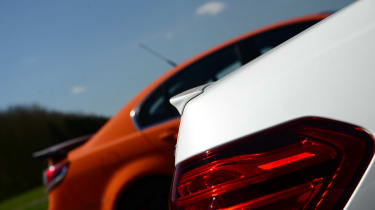 With its tall rear spoiler, gaping front grille and bright orange paint, the aggressive-looking VXR8 leaves you in no doubt about its performance potential. However, if you don’t want to attract quite so much attention, then the subtly enhanced AMG Mercedes is a much better bet.

You expect Mercedes to kit its cars out with plenty of safety aids, but the Vauxhall is equally well equipped. Lane-departure warning, forward collision alert, blind spot monitoring and reverse traffic alert feature on the VXR8. 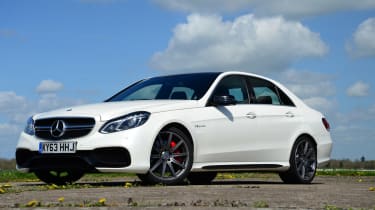 Few cars can match the E63’s supercar-slaying performance, agile handling, upmarket image and practicality. It makes every drive an event, while its muscular V8 is an engineering masterpiece. It’s more expensive than the VXR8, but the extra outlay is money well spent. 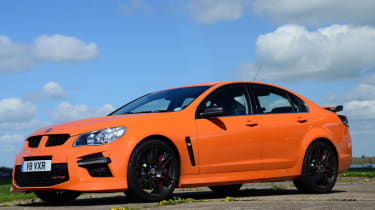 The VXR8 takes the runner-up spot, but the result is closer than you’d think. On the right road, it’s huge fun, plus it’s roomy, well equipped, surprisingly comfy and has a bargain price. It’s not as sharp as the E63, plus garish looks and a cheap cabin let it down.