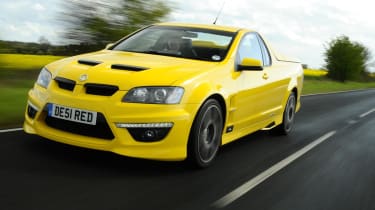 The Maloo has a similar price to a BMW M3, costs a fortune to run and has a cheap-feeling cabin. It’s not even especially practical. But while its looks attract plenty of attention, we can see Vauxhall finding 50 or so buyers keen to make a unique impression with a slice of Australian V8 muscle. It might make no sense, but we hope Vauxhall sells every one.

The Vauxhall VXR8 Maloo is named after the Aboriginal word for ‘thunder’, and it certainly creates a storm on the high street.
The bright yellow part-pick-up, part-muscle car turns more heads than a Lamborghini, although some of the attention amounts to rather embarrassing pointing and laughing from passers-by. Cool this car is not.
But then the Maloo was never designed for British roads. It’s a ‘ute’ version of the Australian-market Holden HSV Commodore, and Vauxhall expects to sell only 50 here, each carrying a hefty £51,500 price tag.
With sales expectations so low, it would be unfair to compare the Maloo to, say, a similarly priced BMW M3. It’s best treated as a fish out of water – and an entertaining one at that.
Just look at it. At the back is a hard tonneau cover that rises up on hydraulic struts to reveal a vast 1,208-litre load bay. The rear also packs a huge diffuser and quad chrome tailpipes, while the front is all VXR8, complete with gaudy LED running lights.
The 425bhp 6.2-litre V8 makes a lovely rumble and can take the car from 0-62mph in 4.9 seconds, but it’s not as loud as you might expect – in fact the engine is rather muted.
Don’t take this as a sign that the Maloo has been tuned for sophistication, though. It will spin its wheels with ease if you turn off the traction control, while the pedals and six-speed gearbox require muscle.
The ride is also on the firm side, but it’s not stiff like a proper pick-up – in fact, the Maloo feels pretty sporty through corners, with meaty steering and quite a lot of grip if you feed the throttle in smoothly.
Even though there’s lots of standard equipment inside, the flimsy stalks and hard plastics let the cabin down, as does the limited space – there’s room behind the seats for a laptop-sized bag, but everything else will have to be thrown in the boot. The tonneau cover also hampers rear visibility, but that does little to dent the fun factor.
Share this on TwitterShare this on FacebookEmail