VW's new mobile EV charging stations will roll out in Wolfsburg over the next six months, before the scheme extends to other German cities 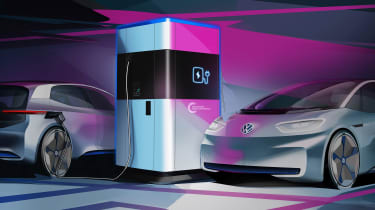 VW has announced plans to introduce a fleet of portable EV charging stations in a bid to strengthen and broaden the network of charging points across Europe.

The pilot scheme will begin in the first half of the year in Wolfsburg, Germany and extend to other cities during 2020. VW has not confirmed the locations of the other sites.

Previewed by VW’s own illustrations, the 360kWh mobile charging station has the capacity to charge 15 e-Golfs to an 80 per cent capacity. Thanks to DC quick charging of up to 100kW the German firm claims such a recharge takes only 17 minutes. 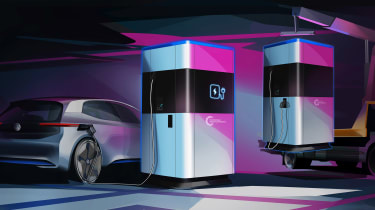 The station operates independently of a power source allowing it to be placed in a variety of locations such as temporary car parks and building sites. Once the station’s power pack has dropped below 20 per cent capacity the station is replaced automatically with a new one.

Alternatively the station can also be hooked up to a 30kW power supply that enables the station to recharge itself. On top of this the stations also allow temporary storage of renewable energy such as solar or wind power, in effect, enabling CO2-neutral mobility.

Do you think mobile EV charging stations are a good idea? Let us know your thoughts below...